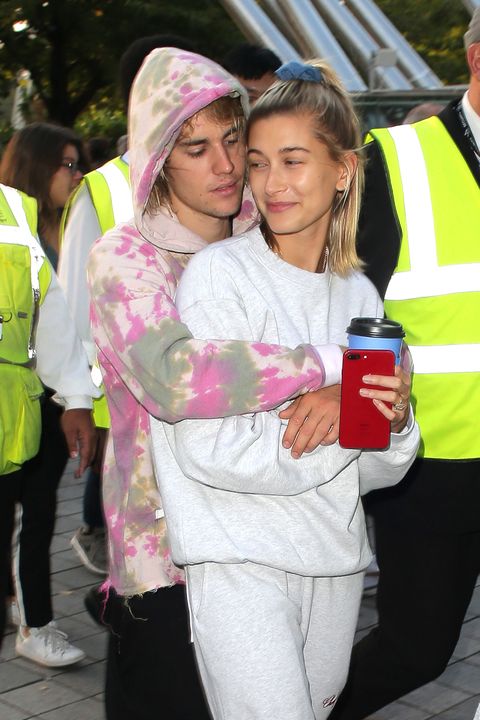 Some celebrity couple are very secretive about their ~love~ and some, well, aren't. Justin Bieber and Hailey Baldwin are in the second camp. The couple, who got engaged over the summer and were rumored to have married in a quiet civil ceremony this fall, have absolutely no problem with PDA. Seriously, Justin and Hailey make out pretty much everywhere they go. And, since there are paparazzi and cameras pretty much everywhere they go, we all get to witness it. Yay us, right?

Justin and Hailey don't just share their love by locking lips in public though. They also love to make out in private, capture the kisses on camera, and then share them on Instagram. What can I say? This is modern love, guys.

Today, Justin shared his and Hailey's latest passionate, could-have-been-private-but-he-'grammed-it kiss on social media. The black and white shot (which is not a selfie, suggesting that either Justin and Hailey's friends and family low-key document their less P moments of PDA or they just make their assistants take pictures of them playing tonsil hockey—either way, it makes you think, right?) shows the couple in a state of pure love. You know, eyes closed, lips smashed together, arms wrapped around each other—the whole nine.

The real highlight of the post isn't the Justin/Hailey kiss. As established, we've all seen plenty of Justin and Hailey kisses at this point. No, the real magic is in the caption, where Justin reveals what appears to be his nickname for Hailey. Warning: It's ridiculous in an ugh-stop-being-so-effing-cute kind of way.

This content is imported from {embed-name}. You may be able to find the same content in another format, or you may be able to find more information, at their web site.
Related Stories
Did Justin Bieber and Hailey Baldwin Get Married?
Ariana Grande Reacts to Justin Bieber Engagement
Kayleigh Roberts Contributor Kayleigh Roberts is the weekend editor at Marie Claire, covering celebrity and entertainment news, from actual royals like Kate Middleton and Meghan Markle to Hollywood royalty, like Katie Holmes and Chrissy Teigen.
This content is created and maintained by a third party, and imported onto this page to help users provide their email addresses. You may be able to find more information about this and similar content at piano.io
Advertisement - Continue Reading Below
More From Celebrity
Gigi Hadid Says She Voted With Her BB
Will Asked His Uncle to Talk to Harry About Meghan
Advertisement - Continue Reading Below
Why the Queen Denied Meghan's Wedding Tiara Pick
Will & Harry's Reactions to Their Parents' Divorce
LOL, Kelly Ripa Comments on Her Hubby's Bulge 🍆
Adele Talked About Her Weight Loss on 'SNL'
J.Lo Steps Out in the Perfect Autumnal Look
Harry & Meghan's Drama Won't Be on 'The Crown'
Will's Talk with Charles That Led Him to Kate
The Queen Saved Will from a Breakdown as a Teen