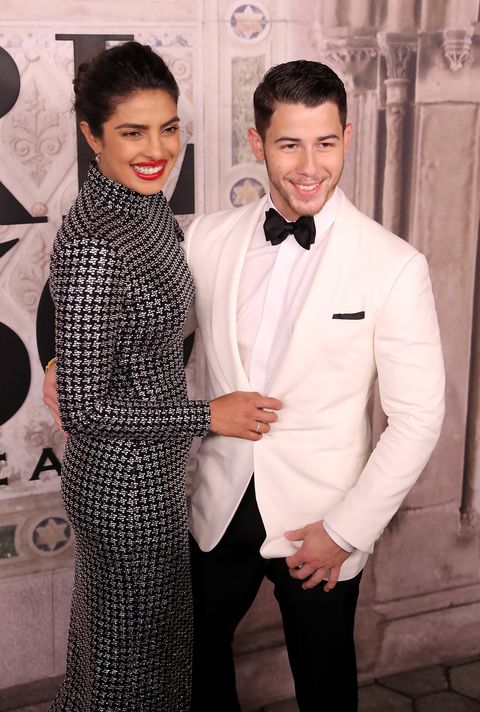 When celebrity love historians of the future (it'll be a job, just wait) look back on 2018, they will remember it as a year of whirlwind engagements and epic, sometimes over-the-top weddings. In the "whirlwind engagement" category, we have the likes of Ariana Grande and Pete Davidson and Justin Bieber and Hailey Baldwin. In the epic wedding category, we have, well, mostly royals honestly, like Prince Harry and Meghan Markle and Princess Eugenie and Jack Brooksbank (who had a literal, Coachella-style outdoor festival as a second reception).

In the center of that Venn diagram, sit Nick Jonas and Priyanka Chopra. The couple got engaged over the summer after starting their romance in late May—they spent all of Memorial Day weekend together and have been more or less inseparable ever since. The couple had no interest in a long engagement and tied the knot this weekend in back-to-back ceremonies (a Christian ceremony, officiated by Nick's dad, Pastor Paul Jonas, on Saturday at Umaid Bhawan Palace, followed by a traditional Hindu ceremony on Sunday).

It's not just the double ceremonies that nudge Nick and Priyanka into the "epic wedding" category though. Nope. The couple took things to the next level by hosting an actual song and dance competition for their friends and family during their wedding weekend.

And this wasn't like, a karaoke machine in the reception hall kind of competition. It was a Whole Thing, complete with a stage and choreography and microphones and a professional video crew filming the entire show from multiple angles, hopefully to be released in 3D a la the JoBro's 2009 concert movie.

You have to see it yourself to understand the scale—and, luckily, Priyanka already shared some clips from the competition on Instagram:

Priyanka also shared some stills from the event, including some of herself wearing a gorgeous silver and gold saree that might have been one of her wedding gowns?

We have never had greater wedding FOMO—or at least not since May.

Related Stories
How Nick Jonas Proposed to Priyanka Chopra
Why Meghan Is Skipping Priyanka and Nick's Wedding
Kayleigh Roberts Contributor Kayleigh Roberts is the weekend editor at Marie Claire, covering celebrity and entertainment news, from actual royals like Kate Middleton and Meghan Markle to Hollywood royalty, like Katie Holmes and Chrissy Teigen.
This content is created and maintained by a third party, and imported onto this page to help users provide their email addresses. You may be able to find more information about this and similar content at piano.io
Advertisement - Continue Reading Below
More From Celebrity
Meghan Discussed Her Daughter in Vax Live Speech
Prince Harry Talks Digital Pandemic at Vax Live
Advertisement - Continue Reading Below
Harry and Will Have Been Arguing for Months Now
Prince Harry Doesn't Regret His Oprah Interview
Archie Has a Distinct American Accent, Apparently
Hailey Wore a Nude Blazer and Micro Dress
Gabrielle's TikTok About Her Prom Date is So Funny
Victoria Beckham Shuts Down 'Spice World 2' Rumors
Kendall Jenner Shared Her Experience of Anxiety
'The Voice' Star Blake Shelton Opens Up About Gwen