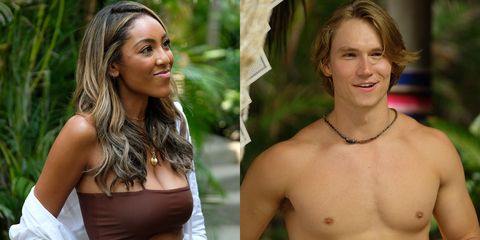 Bachelor in Paradise is a weird show—in a good way, of course, but still. The summer edition of the Bachelor franchise's year-round domination of our TVs brings rejected hopefuls from past seasons of The Bachelor and The Bachelorette together in Mexico for a chance of summer love.

The show sounds like it should be a 24/7 hook-up fest—and it is that, at times. But, weirdly, it's also a place where members of Bachelor Nation really find lasting love connections, as evidenced by how many weddings the summer series has spurred.

This year's strangest and most wonderful BiP pairing by far has been Tayshia Adams, from Colton Underwood's season of The Bachelor, and John Paul Jones, from Hannah Brown's season of The Bachelorette. Tayshia and JPJ are probably the last two BiP cast members we would have guessed would connect, but they're also perfect in every way.

Turns out, Caelynn Miller-Keyes (who was with Tayshia on Colton's season and is also on Bachelor in Paradise this summer) is shipping the couple right along with the rest of Bachelor Nation—maybe even more than her own Paradise relationship with Dean Unglert.

She broke it down in the comments of a recent Instagram post. When a fan commented that she and Dean were the "best couple in Paradise," Caelynn replied, "Whoa. Have you seen Tayshia and JPJ???"

And, if you're shipping Tayshia and JPJ along with Caelynn/the rest of the internet, take heart. Fans noticed that, in a recent, but now-deleted Instagram photo, Tayshia appears to be hanging out on JPJ's boat.

Related Stories
Caelynn from 'BIP' Shares "Trust Issues" Instagram
Mike Just Got Savage on an Instagram Troll
Kayleigh Roberts Contributor Kayleigh Roberts is the weekend editor at Marie Claire, covering celebrity and entertainment news, from actual royals like Kate Middleton and Meghan Markle to Hollywood royalty, like Katie Holmes and Chrissy Teigen.
This content is created and maintained by a third party, and imported onto this page to help users provide their email addresses. You may be able to find more information about this and similar content at piano.io
Advertisement - Continue Reading Below
More From 'The Bachelor' Franchise
'Bachelor In Paradise' 2021: Everything We Know
What Happens on Katie's Season?
Advertisement - Continue Reading Below
Twitter Is Obsessed With Greg on 'Bachelorette'
Meet the Cast of Katie's 'Bachelorette' Season
Blake Moynes Has a Thing For 'Bachelorette' Leads
All the Deets on Michelle's 'Bachelorette' Season
Chris Harrison Will No Longer Host 'The Bachelor'
Everything to Know About Tayshia Adams
What to Know About Katie’s 'Bachelorette' Season
'The Bachelorette' Got Extra Weird With Bios