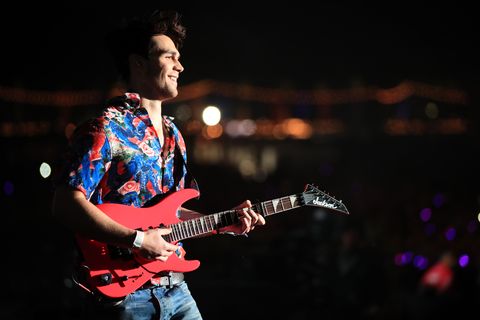 Footage of the miraculous event has been spreading on Twitter, where Apa's fans are still not over the semi-surprise performance.

Festivalgoers couldn't get over Apa's performance and his guitar solo in particular.

Oh my god @kj_apa just slayed it. His solo was so incredible and wow wow wow I’m so proud of him. That guitar solo was everything #Coachella #COACHELLASXM

The performance was lit—literally, by fireworks that showered the stage as he played. Full rockstar treatment.

Apa teased his Coachella appearance on Instagram earlier this week. "See ya on stage with @kygomusic #Coachella," he wrote.

In another Instagram post after his performance, he described the experience of being on stage at Coachella as "Crazy." Next year, please bring Josie and the Pussycats, KJ.