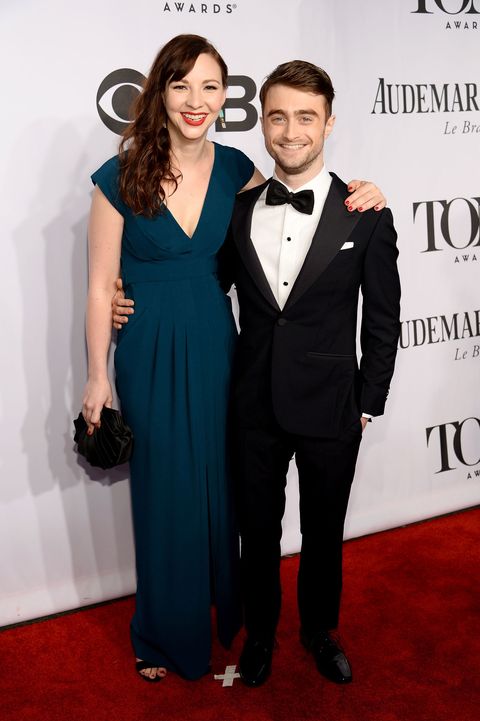 If Daniel Radcliffe and his girlfriend, fellow actor Erin Darke, end up settling down and having kids, they'll have one hell of a "how I met your mother" story. In an interview with Playboy, Radcliffe said the two of them got together after filming a sex scene.

Radcliffe and Darke met on the set of the movie Kill Your Darlings, in which he played Allen Ginsberg while the poet was a student at Columbia University. And while the movie generated a lot of buzz for his gay sex scene in the film, it was another one with Darke that would change his life.

In one sexy/mostly awkward scene, Darke's character, Gwendolyn, comes on to Ginsberg in the stacks at the library. "That's a wonderful record of us flirting for the first time," Radcliffe said. "There's no acting going on—not from my end, anyway." He said that the rapport between the two of them was genuine from the start. "There's a moment when she makes me laugh, and I'm laughing as me and not as my character," he said. "She was incredibly funny and smart. I knew I was in trouble."

He also told Playboy that when he visited her family in Michigan, it was a media circus—so much so that the Detroit Free Press called her father to ask if they were getting married that week. "I suddenly had that moment of, Oh, my weird life is now impacting your life," he said. "I felt really bad. Wonderfully, they found it funny."

Here's the (NSFW) scene that started it all, but fair warning: You will never be able to think of Harry Potter the same way again.

This content is created and maintained by a third party, and imported onto this page to help users provide their email addresses. You may be able to find more information about this and similar content at piano.io
Advertisement - Continue Reading Below
More From Celebrity
The Palace Just Shared Prince Louis Birthday Pic
Meghan and Harry Talked Every Day During UK Trip
Advertisement - Continue Reading Below
J.Lo Wishes A-Rod's Daughter a Happy Birthday
Irina Shayk Shared a Rare Photo of Her Daughter
John Travolta Talked Dancing With Princess Diana
Meghan Markle and Archie Speak to the Queen
Who Is Alexandria Ocasio-Cortez's Partner?
Did Charles, Harry, and William Mend Relationship?
The Kardashians' Most Body-Confident Nude Shoots
Chrissy Teigen + Meghan Markle Spoke About Loss