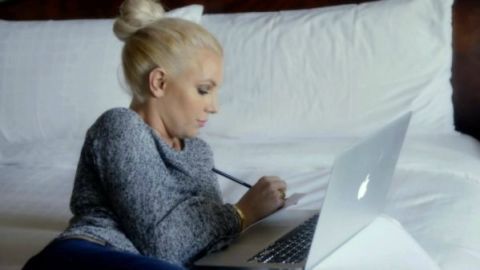 Deepening the mystery surrounding her writhing-in-a-bikini videos, Britney Spears has revealed that she does not, in fact, use the computer. Then who uploaded them? Who does her Twitter? IS IT EVEN BRITNEY TWEETING ABOUT ICE CREAM?

Yummy to my tummy! pic.twitter.com/YTwAHQEXQC

"Honestly, I still don't use my computer," she said in an interview for V Magazine's centennial issue, in which she calls her new album "the best thing I've done in a while." "My kids use the computer more than I do! I understand that a lot of people are into it, and I have days where I write and stuff, but it's really not for me. It's not my thing."

I don't know what to believe anymore.

Got a spray tan...look a little like an Oompa Loompa 😜 pic.twitter.com/3jajWvJSBh

To read Britney's entire interview, pick up the new issue of V Magazine. How amazing does she look on this cover, btw?

On stands this week!! @vmagazine and @MarioTestino know how to make mag cover magic. 💜 #V100

Chelsea Peng I'm Chelsea Peng, the assistant editor at MarieClaire.com.
Advertisement - Continue Reading Below
More From Celebrity
Rih Was Shocked by the Reaction to Fenty Beauty
Behold: Celebrities Who Dated Normals
Advertisement - Continue Reading Below
Kate Middleton & Michelle Obama Use This $64 Cream
A Full Timeline of Tyler C. & Hannah B.
Blake and Ryan Donate $400K to NY Hospitals
Prince William May Work as an Air Ambulance Pilot
Harry Is Likely to Get U.S. Diplomatic Status
Harry Was Forced to Give Up His Military Titles
Ariana Grande Revealed Her Natural Curls
Fans Love This Accident Meme of Queen Elizabeth