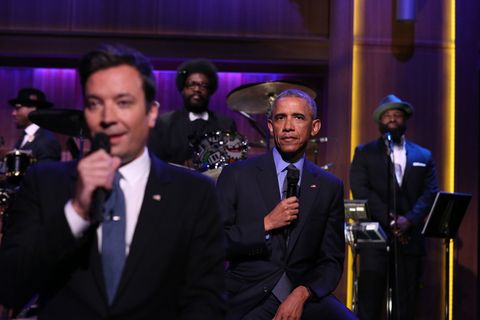 Barack Obama just showed up on The Tonight Show, and though he mused on politics and hung out with Madonna, his attitude was mostly just: ¯\_(ツ)_/¯.

The president, who only has a few months left before he skips off into the sunset all "let freedom riiiiiing," agreed to slow jam the news with Jimmy Fallon, and the results are as follows:

Literal sentence Obama says about Trump in the video above: "I've been watching my new favorite show, Orange Is Not the New Black."

Of course, POTUS also talked about *important* things in between all that slow jamming—like that time Sasha and Malia chilled with Ryan Reynolds.

And his plans post-presidency:

Sigh, we'll miss Barack.  In the words of Jimmy Fallon, "even when congress tried to block him, he found a way in through the back door." 🙏