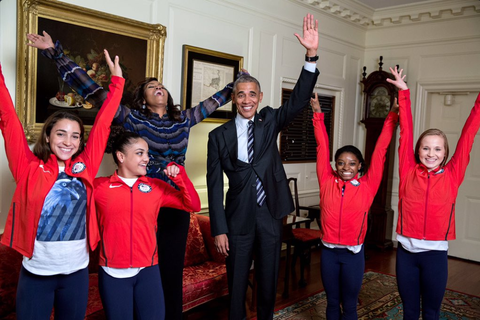 As if he were a third grader during the last week of school (minus the finals), President Obama is making the most of his remaining days in the White House by being more of a lovable goofball than ever. For his latest shenanigan, he tried to do a split with the Final Five, but ended up just barely doing a half-squat that would get you laughed out of most gyms that don't offer free pizza and bagels in the lobby.

During an event honoring the U.S. Olympic and Paralympic teams, the president made up for his lack of flexibility with good humor. "I want you to know that I was going to do, like, a floor routine on the way out with Simone," he said. "But we decided it was a little too crowded."

"And he can't touch his toes," Michelle Obama said (roast count: ∞). "And I can't touch my toes," he admitted.

He is a perfect 10 in our book. #TeamUSA 🇺🇸 pic.twitter.com/kxyB3mx6RP

Chelsea Peng I'm Chelsea Peng, the assistant editor at MarieClaire.com.
This content is created and maintained by a third party, and imported onto this page to help users provide their email addresses. You may be able to find more information about this and similar content at piano.io
Advertisement - Continue Reading Below
More From Celebrity
Harry and Will Have Been Arguing for Months Now
Prince Harry Doesn't Regret His Oprah Interview
Advertisement - Continue Reading Below
Archie Has a Distinct American Accent, Apparently
Hailey Wore a Nude Blazer and Micro Dress
Gabrielle's TikTok About Her Prom Date is So Funny
Victoria Beckham Shuts Down 'Spice World 2' Rumors
Kendall Jenner Shared Her Experience of Anxiety
'The Voice' Star Blake Shelton Opens Up About Gwen
Sussexes Share New Birthday Photo of Archie
Charles Is Still Upset Over Harry's Oprah Tell-All