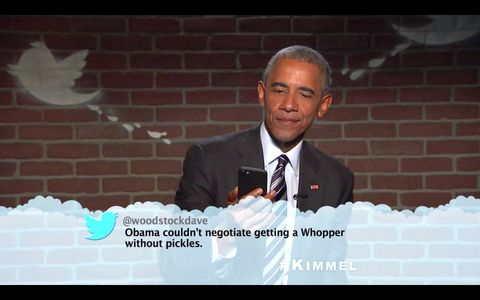 Feel that chill? It's Barack Obama, descending upon Jimmy Kimmel's Mean Tweets like a shade-hurling hero, delivering Donald Trump burns like it's his job. Which, honestly, at this point it kind of is.

Yeah, Obama read some pretty brutal tweets (faves include "Barack Obama is the Nickelback of presidents" and "Barack Obama dances like how his jeans look") but he turned things around like whoa when faced with a Donald Trump tweet. Behold:

Obama also chatted about—what else?—Trump's leaked tape, saying he was leaving an event in Chicago when someone played it for him. "I think that's one of those things where if your best friend who worked in the office somewhere had that video, it would be a problem for him, and he's not running for president," Obama said. "And rightfully so."