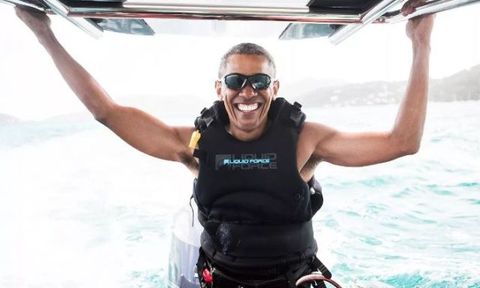 What was the first thing President Obama did after handing the baton to reality television star Donald Trump? Go on vacation, duh, which is where his alter-ego Backwards Hat Obama was born.

The president joined Richard Branson in the Virgin Islands, and guys. THE PHOTOS ARE MAGIC. Please prepare for what you're about to see, because life as you know it will change.

First of all, there's this gem of Branson fake-choking Obama while he flexes his muscles. The hijinks!

Of course, then we have this amazing pic of Obama waiting for his kite to lift him. LOL, look how serious he is!

Loved offering @barackobama the chance to learn to kitesurf – here’s how he got on https://t.co/5hwjOvy2TK pic.twitter.com/jk3OEtDELq

And last but not least, there's this. Obama simply living his best life.

Never change, Backwards Hat Obama. Also, shoutout to Richard Branson for dedicating an entire blog post to this, and making a YouTube video chronicling his friendship Obama with a truly hilarious soundtrack. They're basically the Buzz and Woody of our time.