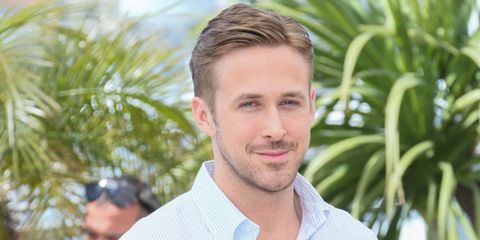 Ryan Gosling is going from the city of stars to the actual stars (LOL, you're welcome). The actor is set to star in Universal's upcoming biopic First Man, playing none other than Neil Armstrong.

First Man is scheduled for an October 2018 release and will be helmed by La La Land director Damien Chazelle—so we know there's the potential for legitimate movie magic. According to The Hollywood Reporter, the film will chronicle NASA's mission to put a man on the moon, specifically focusing on Armstrong's experiences from 1961 until 1969, when he famously took a giant leap for mankind.

We have no doubt that Gosling has the acting chops to play an iconic American hero, but it doesn't hurt that there's a definitely resemblance between him and Armstrong:

Is it too early to start a countdown to blast off for this movie? Answer: no.

Kayleigh Roberts Kayleigh Roberts is the weekend editor at Cosmo, focused on celebrity news and royals.
This content is created and maintained by a third party, and imported onto this page to help users provide their email addresses. You may be able to find more information about this and similar content at piano.io
Advertisement - Continue Reading Below
More From Celebrity
Anna Kendrick Looked Pretty in Pink at a Premiere
John Mulaney & Olivia Munn Might Split Up: Source
Advertisement - Continue Reading Below
The Sussexes Worried Archie Would Attract Mockery
Diana Would Be "Thrilled" for Harry and Meghan
'Friends' Actor James Michael Tyler Has Died at 59
Prince William Mentioned Harry By Name, Finally
Republicans Want Meghan Markle Stripped of Title
Princess Diana Would Be "Horrified" By Portrayals
The Cambridges Head Out on Vacation
Spice Girls Reunion Tour Might Feature Posh Spice