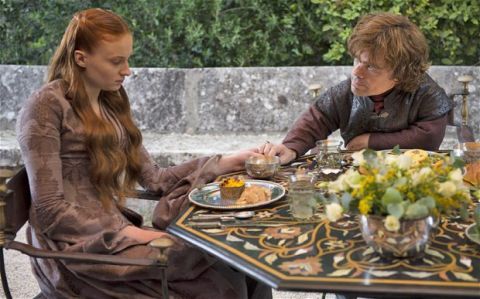 Summer may be filled with sun, vacation and relaxation, but since we're in a Game of Thrones drought until next spring, it's hard to enjoy the season without our favorite show. Instead, we have to rely on bits of news pieces to ease the countdown to season five. Thanks to Comic Con, doses of GoT have been coming in full force. After season four's heart-wrenching Red Wedding (we're still crying about it), there's some serious holes in the world of Westeros that need to be filled. As such, producers have announced the addition of nine new characters for the show's upcoming season. The new characters range from Westeros royalty, such as the Prince of Dorne and his son, family members of deceased characters like the Sand Snakes, or familar names with unfamilar faces—characters that have been recast, such as Myrcella Baratheon. From good to evil to just plain gross, there's a wide variety in Westeros's newest inhabitants.

The Prince of Doran is the brother of the now deceased Red Viper. Unlike his brother, he most likely won't be as violent of a character due to physical limitations: he's in a wheelchair.

Son of Doran, Tyrstane is engaged to Myrcella of the Baratheon family.

Myrcella isn't a new character, but she's been recast for the upcoming season. She's connected to a lot of GoT favorites, such as brothers Joffrey and Tommen and father Robert Baratheon. She's betrothed to Trystane, another new character.

The bodyguard of Prince Doran is not one to be messed with. He's married to his axe (literally).

This slave trader is in the running for most repulsive GoT character. He's hugely obese, inflicted with a rare jungle disease and has a bladder issue that leds him to consistently smell of urine. With all those traits, he's got to be a source of some serious disaster in Westeros.

This cast addition is three characters rather than just one. It's the Sand Snakes, Nymeria, Tyene, and Obara. They are the out of wedlock daughters of the deceased Oberyn Martell, and have inherited their father's take-no-prisoners outlook.

This man is one to pay attention to. He's the High Septon of the Faith of the Seven, and he's known for being part uber-religious and part devious and dangerous.

These new characters just add even more questions to our ever-growing list of curiosities after the season four finale. Most of all, what's next for Tyrion Lannister after he killed his father at the end of last season? His future could be in the North, or with Daenerys Targaryen. She's without a counselor and partner after the loss of Jorah Mormont. If the two were two team up, they'd be unstoppable. As for the show's freshest faces, all we can ask is that they don't kill them off right as we're getting emotionally attached. But knowing Game of Thrones, don't get your hopes up.

More on Game of Thrones:

The Best Braids in Game of Thrones

Diana Pearl Producer Diana is a producer at ELLE.com.
This content is created and maintained by a third party, and imported onto this page to help users provide their email addresses. You may be able to find more information about this and similar content at piano.io
Advertisement - Continue Reading Below
More From Culture
A Peek Into Priyanka Chopra's London Bookshelf
Fans Are Ready for Second Season of 'Bling Empire'
Advertisement - Continue Reading Below
What We Know About Part 2 of 'Lupin'
You *Need* to Follow the 'Bling Empire' Cast on IG
Watch the Trailer for the New 'Euphoria' Special
We've Getting a Season 2 of 'Bridgerton'
New Drama Movies That Promise to Move You
The Sexiest New Movies of the Year
Where Is the Cast of 'Gilmore Girls' Now?
A Look Back at Princess Anne's Life in Photos