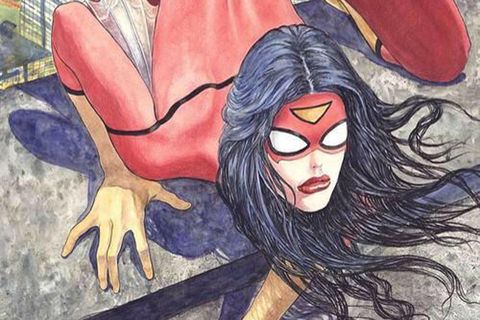 The official cover art is pretty standard, though, it does seem to throw her bust into the spotlight:

And her sidekick, Silk, seems to be posed too provocatively to be able take any real action. But at least the plot looks pretty cool:

A war is brewing, and every spider-character in the multiverse is a target! But being a target is something Jessica Drew just won't abide. She's a woman with a mission and with Silk, the newest spider-character on the block at her side, she'll have to put all her training to the test if she wants to make it out of Spider-Verse alive!

But the variant cover, created by Milo Manara, needs discussing.

Now come along @Marvel was this cover for Spider-Woman really necessary? I expected a little better than this for SW! pic.twitter.com/ag4aEuX9nk

Marvel declined to comment on the issue to The Mary Sue. But if they want to attract female fans, they should at least have their male superheroes pose like this too. Here's an illustration of The Avengers posed like Scarlett Johansson's character for inspiration.

This content is created and maintained by a third party, and imported onto this page to help users provide their email addresses. You may be able to find more information about this and similar content at piano.io
Advertisement - Continue Reading Below
More From Culture
Pre-Order These Highly-Anticipated 2021 Books
The Best Shows to Stream on Every Platform
Advertisement - Continue Reading Below
Where Is the Cast of 'Gilmore Girls' Now?
A Look Back at Princess Anne's Life in Photos
The Top-Grossing Book-to-Movie Adaptations
Historical Films to Stream If You Loved 'Hamilton'
Meena Harris and 'Bridgerton' Collab for Merch
Will There Be a Season Two of 'Ginny & Georgia'?
We Need to Talk About the End of 'Behind Her Eyes'
People Have a Lot of Feelings About 'I Care a Lot'