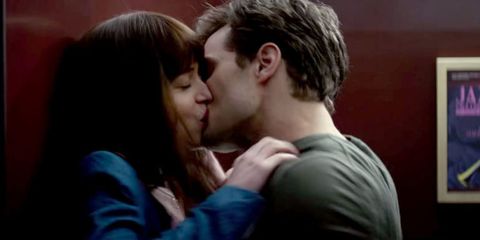 The release of Fifty Shades of Grey may be less than a month away (#blessed), but don't expect two hours of straight sex scenes. "I'd say it's pretty 50/50," director Sam Taylor-Johnson told Variety of the sex to non-sex scene split.

According to Taylor-Johnson, there was actually much more sex in the original script,  but for some reason, this was a problem. "On the early draft, there was a sense there was way too much sex. The story, of course, is of equal importance. We tried to balance the narrative correctly, so one doesn't feel like it's drowning the other." (Okay…)

Fifty Shades' sex scenes will focus on build up, Taylor-Johnson said, unlike other films where "the minute there's penetration, it's all over." Which, we hope, translates to extra shirtless Jamie Dornan scenes because:

Book author E.L. James also guarantees your satisfaction. "I'm pretty sure the millions of fans who have read the trilogy will think there is enough sex." And Dornan, aka Christian Grey, calls the sex on screen groundbreaking. "This kind of sex—S&M—hasn't been depicted on the big screen ever."

The group revealed quite a few more details about the film in Variety, too. Below, the most important gems:

1. Jamie Dornan is not looking forward to you seeing his sex face. "It's the worst thing imaginable. For all the reasons anyone would think, most people would like to keep their sex face private. The idea of a million people seeing that! I hope it happens quite fast!"

2. That infamous tampon scene from the book will be missing. "It was never even discussed," Taylor-Johnson said. "The book needed to put you in Ana's shoes to be a successful experience," producer Michael De Luca added. "A lot of it was very literal. The movie didn't need to do that. It's a completely different medium."

3. Dornan won't be going full frontal and wore a "penis pouch" while shooting. "It's like one of those little satchels that Robin Hood or someone of that era would have tied on to his belt. There's no back. It's tiny. I mean, it's not tiny! Because it's got to hold a lot." Of course it does.

4. Dornan had some "good chats" with an expert for his S&M scenes. "He's a guru, and a dominant. … I learned all sorts of tricks that will support me through my life."

5. There were a few injuries during the nine and a half week shoot. "I think there was a bit of rope burn," Taylor-Johnson said. "I'd have to remind Jamie to hold back with the prop."

6. The best sex scene is the last one, naturally. "The scene that we talked about a lot is the final scene, where Ana asks him to do the worst he can do to show her how bad it's going to get," De Luca said. "It's the closest Christian comes in the first book to being his full dominant self. Jamie's performance in that scene is a miracle. He really gets carried away in the moment."