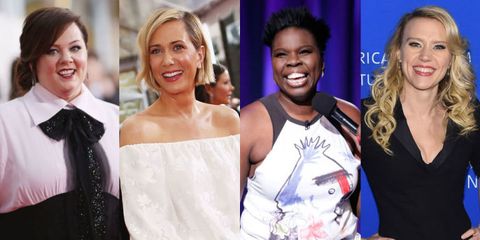 Now the real thing is here and somehow it's even better than we'd imagined? According to The Hollywood Reporter, Kristen Wiig, Melissa McCarthy, Leslie Jones, and Kate McKinnon will star as the main ghostbusting quartet. Melissa and Kristen both worked with Feig on Bridesmaids, while Leslie and Kate are busy killing it every week on Saturday Night Live. (Watch them. Seriously.)

THR reports that McCarthy has already signed on for sure, while the other three actresses are still in negotiations. Don't worry, though. It's probably because the producers just want to triple-check that they ain't afraid of no ghosts.