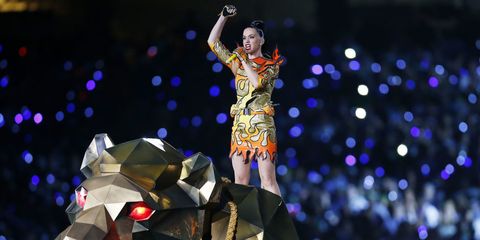 The scene: Dancing palm trees. Dancing sharks. Dancing beach balls. Lenny Kravitz in a sheer, blingy tank top. Can you get better than that? No. No, you cannot.

So @katyperry wasn’t kidding when she said she was bringing a lion to the #SuperBowl 😳 pic.twitter.com/vHUAdJ2KUx

Katy started her her performance with a roar—literally, courtesy of the lion robot she rode in on. KT then transitioned to "I Kissed a Girl" with Lenny Kravitz, who wore a magnificent, sparkly top, leather jacket, and sunglasses while Katy shimmied up against him. Magic.

The Super Bowl gods then provided an abundance of dancing inanimate beach-themed objects: smiling, shimmying palm trees, enthusiastic surf boards, bouncy beach balls, and sharks that were into it. It was "California Girls" on hallucinogens...and we liked it.

But she's not done! Of course she's not done. This is the moment when Katy Perry decides to raise the bar on halftimes forever by ceding the stage to Missy Elliott, who comes literally out of nowhere and performs all the songs we love her for.

The blink-and-you-missed-it costume changes were almost the most impressive part of Katy's performance, because seconds after we watched her breaking it down with Missy, Katy reappeared in a silver gown, standing on a shooting star (which everyone on Twitter compared to NBC's "The More You Know" PSA) to serenade us with "Firework" while floating above the crowd.

Can you come back every year, Katy?