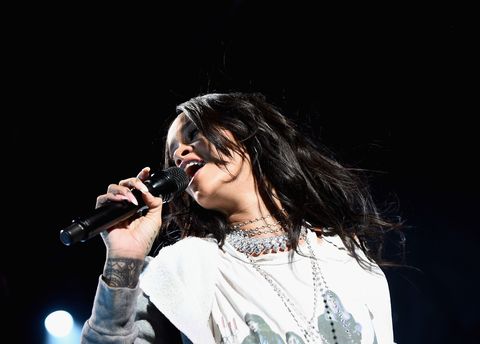 Hot on the heels of Beyoncé's surprise drop of her new track to Tidal, we have a new song from Rihanna, the studio version of "American Oxygen." As with Beyoncé's "Die with You," this one is available exclusively on Tidal, but you can listen to the version below as long as it lasts. Which probably won't be long so listen rightnowthisveryminute because it is so, so good.

Now please excuse me, I'll be in the corner swaying to the song and hugging my life-sized cardboard cutout of Rihanna. Yes, that is something I own and no you cannot have it.

Rihanna's Being Accused of Stealing "BBHMM" from Another Artist

Why You Should Steal Rihanna's Slicked-Back Hairstyle

Laura Beck Laura Beck is a Los Angeles-based TV writer and frequent contributor to Cosmopolitan.com — her work has appeared in the New York Times, New Yorker, Jezebel, and the Village Voice.
Advertisement - Continue Reading Below
More From Culture
Who Will Be on 'Bachelor in Paradise' in 2020?
When Will 'The Bachelor' Women Tell All Air?
Advertisement - Continue Reading Below
'The Bachelor' Has Already Finished His Season
The 83 Very Best Rom-Coms of All Time, Ranked
An Investigation Into the Next 'Bachelorette'
The Best Korean Dramas to Get You Hooked
Who Is 'Bachelor' Contestant Victoria Fuller?
Everything to Know About Peter Weber's Ex
Read an Excerpt From the Uber Whistleblower's Book
The Must-Watch TV Shows of 2020