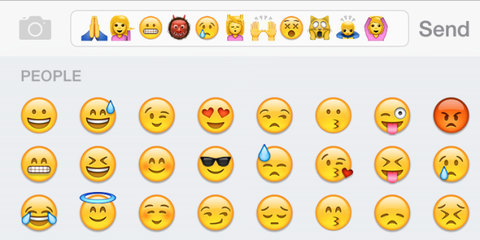 If you have an iPhone, chances you've used an emoji or two in a text. But are you actually using them correctly? There are a few popular ones that are often misinterpreted, but we've found their official meanings via Unicode.

If you've been using this much-debated icon to signify a high five, you're wrong. This actually is meant to be a person with folded hands — which implies praying or bowing.

The red-faced angry emoji isn't a mask, the devil, or a character from Where the Wild Things Are – it's a Japanese ogre.

This looks like a crying emoji at first glance, but observe the placement of that water droplet. It's on the side of the face, signifying sweat rather than tears, and is officially called the "disappointed but relieved face."

The double Xs make this emoji appear to mean "dead," but it is intended to demonstrate astonishment.

Think this means "praise Jesus"? Nope. It's actually just the raised hands of a person celebrating.

If you've always been confused about what's on this woman's head, here's your answer: hands. She is getting a massage, though why it's happening to her face is less clear.

This appears to be a shocked emoji, but it actually means "hushed."

This definitely looks like an awkward, uncomfortable grimace, but it technically is a super happy smiling emoji.

This face looks like it's whistling, but it's actually just another kissy face that offers less love than the kissy face with a heart.

The emoji with its tongue hanging out is often used as a goofy or teasing emoji, but surprise! It's supposed to mean you are enjoying a food you like.

If you've been using this as a waving or sassy emoji, brace yourself for the much less exciting true meaning: It's just a helpful information desk person.

This definitely looks like it signifies a hot cup of tea or soup, but it actually means "hot springs."

Though this cat's face appears shocked, Unicode insists it is actually just weary.

Okay, I admittedly had no idea what this actually was, but according to Unicode, it is a woman making an "OK gesture." Does anybody actually do this when trying to signal that they're okay?

This doesn't actually represent fire, though it certainly looks like flames — instead, it means "name badge."

This guy looks pretty stressed out, but he is, in fact, bowing deeply to show how sorry he is. Perhaps he is apologizing for being such a confusing emoji.