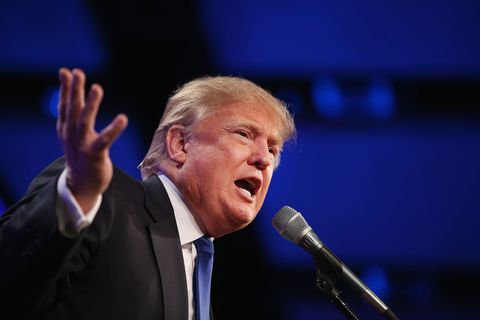 Donald Trump has insulted women for decades. Most recently, he unleashed a war of words on Fox News host Megyn Kelly, questioning her professionalism and suggesting she treated him unfairly at Thursday night's Republican debate because she was on her period. Trump has denied that suggestion, and even told Face the Nation on Sunday that he'd be "phenomenal to women."

Here, 10 examples to the contrary.

1. That time the most important thing was a "beautiful piece of ass."

In a May 1991 Esquire magazine profile, Trump had this to say about his recent bad press: "You know, it really doesn't matter what they write as long as you've got a young and beautiful piece of ass. But she's got to be young and beautiful."

2. That time he called out a breastfeeding mother.

"You're disgusting." Trump hurled this barb at a female lawyer, who, during a deposition involving Trump, asked for a medical break to pump breast milk for her 3-month-old daughter.

3. That time he slammed Kristen Stewart.

4. That time he implied that women on their periods are crazy.

5. That time he mansplained why Ariana Huffington got divorced.

6. That time he compared a 'New York Times' columnist to a dog.

Trump sent Gail Collins one of her columns, in which she called him a "financially embattled thousandaire," with her picture circled and a note saying, "The Face of a Dog."

8. That time he definitely pulled an HR violation on 'The Apprentice.'

"It must be a pretty picture," he said to her. "You dropping to your knees."

9. That time he threw political shade at Bette Midler.

10. That time he described Rosie O'Donnell in four words.