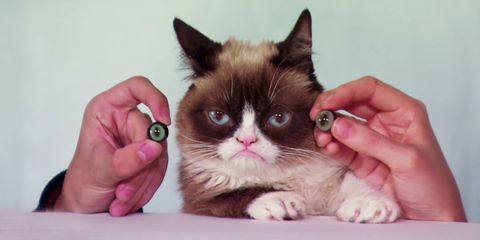 It was bound to happen: Grumpy Cat has become the first-ever cat to be immortalized as a wax figure at Madame Tussauds—and (duh) she's not very happy about it.

The internet's most beloved cranky animal will be on display at the attraction's San Francisco location later this year, before clawing her way to five other cities across the US. And, icing on the proverbial cat cake, the wax figure will be animatronic, to boot.

Of course, GC is unimpressed: "This is truly an honor...I hate it," she "said" in a press release.

Grumpy Cat, who first found fame after her photo was posted on Reddit in September 2012, has been fairly busy of late, from events to new projects...like a possible sequel to the Lifetime original movie Grumpy Cat's Worst Christmas Ever.

Watch a preview of Grumpy Cat at Madame Tussauds below:

Advertisement - Continue Reading Below
More From Culture
Behold This Beyoncé-Inspired Gymnastics Routine
'The Bachelor' Has Already Finished His Season
Advertisement - Continue Reading Below
An Investigation Into the Next 'Bachelorette'
The Sexiest TV Scenes of All Time
Unmissable Horror Movies Coming Out This Year
Treat Yourself to a Chick Flick Tonight
Who Will Be on 'Bachelor in Paradise' in 2020?
Can We Talk About Kelly's Mom From Love Is Blind?
The Best Reactions to the 'Love Is Blind' Finale
Hilary Duff Hints About 'Lizzie McGuire' Reboot