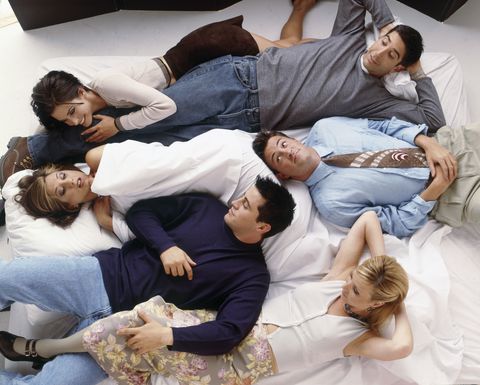 Friends has been in your lives for years—it started in 1994, and you've basically not stopped watching it (or rewatching it) since. But because you were quite young when it first hit your screens, it turns out that you missed a lot when you first sat in front of it.

Because, you guys, Friends is rude. Like, really rude. And it's no surprise that your innocent, naive young minds didn't quite understand all of the dirty jokes. Here are just a few moments that will make you go, "Ooooooh," when you watch them again…

The line: Rachel angrily tells Ross: "It's not that common, it doesn't happen to every guy, and it IS A BIG DEAL." (Chandler: "I knew it!")

What you thought it meant: We were genuinely baffled. We all knew that Ross was unique, to put it kindly, but what on earth could Rachel have been referring to? It was only much later when—a little more worldly-wise—you realized Rachel's true meaning (and Chandler's horror).

The line: Rachel, having read a self-help book: "How do you expect me to grow if you won't let me blow?" Ross's response: "…You know I don't have a problem with that."

What you thought it meant: That Ross was very laissez-faire about allowing Rachel to fart in front of him. (So clueless.)

3. Mark Getting Rejected by Rachel

What you thought it meant: Mark was just going to go home and maybe fume silently at the thought of Ross. We didn't know it had anything to do with, um, self-love.

The line: Rachel and Ross are getting hot and heavy at the Planetarium when Rachel is suddenly shocked and tells Ross it's okay. "What? Oh, no, you just rolled over the juice box."

What you thought it meant: Rachel thought Ross had peed himself. Simpler times.

The line: Chandler is horrified when he finds out that Phoebe and Rachel always go on a Christmas present hunt. "You don't, like, go into the back of my closet, and look under my gym bag or anything? BECAUSE THAT'S WHERE JOEY GAVE ME SOME STUFF TO STORE THAT I'VE NEVER SEEN BEFORE IN MY LIFE!"

What you thought it meant: We didn't know. All we knew is that it definitely wasn't Joey's stuff.

The line: Rachel tries to help Monica when she accidentally banged Ben's head by banging her own head against a post (so he'd think it was normal). "Y'know, if it's not a headboard, it's just not worth it."

What you thought it meant: This one flew way over your head, to be honest. You just pretended you hadn't heard it.

The line: Rachel is desperately trying to teach Joey how to sail and asks him how to get the main sail up. "Uh, rub it?"

What you thought it meant: You knew Joey was clearly not very intelligent, so you thought he was just being weird.

8. Monica Gets Interrupted in the Shower

The line: Ross is horrified when Phoebe's dollhouse catches on fire and rushes into the shower to save it—only to find Monica in there. "By the way, I was just checking the shower massager," she tells him later.

What you thought it meant: You  thought the writers were stalling with Monica's tales of plumbing. You had no idea there was another layer to it. (Now you do, this is totally gross—MONICA AND ROSS ARE SIBLINGS.)

The line: Rachel is annoyed when Ross picks out a Little Bo Peep outfit for her to wear, but he says he didn't recognize it without the inflatable sheep. Rachel: "Yeah, which by the way, Chandler, I would like back one of these days."

What you thought it meant: Chandler likes sheep toys because they're cute.

10. Joey's Take on the Financial Markets

The line: Monica, suddenly obsessed with making money on stocks and shares, announces that she has a strategy: "My motto is get out before they go down." Joey's response: "That is so not my motto."

What you thought it meant: Joey wasn't to be trusted with investments.

The line: Rachel's disastrous half shepherd's pie, half trifle concoction gets Ross checking the recipe—and discovering the book's pages are stuck together. Joey fumes: "Chandler!"

What you thought it meant: Chandler is a messy cook.

The line: Ross decides to make himself happy for his New Year's resolution. Chandler asks: "Do you want us to leave the room?"

What you thought it meant: Ross just wanted some privacy to figure out the new things he was going to do each day.

13. Joey and Chandler's Night of Joy

The line: Not a line so much, but after Monica and Rachel kiss to get their apartment back, Chandler and Joey quickly say good night and head straight to their separate bedrooms.

What you thought it meant: Wow, everyone was really tired after all that apartment moving…