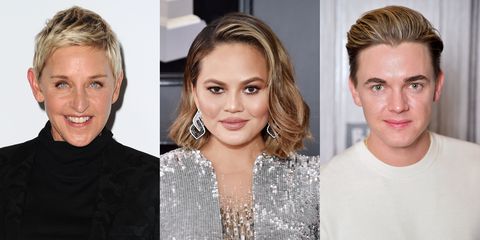 ICYMI: "Yanny or Laurel" is the new great debate that's taking over Twitter. It's like The Dress debate of 2016—is it black and blue or gold and white? (The world still may never know. Except, we do, it was black and blue. Anyway.)

It all started two days ago when Cloe Feldman tweeted an audio recording of a robotic-like voice saying either of the two words: "yanny" or "laurel," which seemingly sound nothing alike. In the tweet, she simply wrote: "What do you hear?! Yanny or Laurel."

What do you hear?! Yanny or Laurel pic.twitter.com/jvHhCbMc8I

While Feldman herself says she hears Yanny, a lot of other people have made a case for Laurel—and a lot of people hear both (ME!!!). And, of course, like all drama on the interwebs, stars have their own opinions. So, are your favorite celebrities #TeamYanny or #TeamLaurel? Scroll down to find out.

I truly do not understand where Laurel comes from. I only hear Yanny. This is not a bit, I am so confused https://t.co/1rdGD3r5cZ

it's so clearly laurel. I can't even figure out how one would hear yanny.

Literally everything at my show just stopped to see if people hear Laurel or Yanny. I hear Laurel. https://t.co/efWRw1Gj0L

Not to be a total nerd, but this is a frequency debate. Everyone will hear something different depending on the highs and lows they’re lacking. The real question is, “How’s your Hearing?” Btw...I hear laurel. Lol. #YannyorLaurel https://t.co/q8IWJfcYgi

I could only hear Yanny at first.
Then @DerekWatt34 told me about the high/low pitch and now I can only hear Laurel haha https://t.co/dv58tIt6YV

I hear #yanny so clearly... but if I listen closely I can hear a deep quiet ghost saying #laurel.... so there... anyone else hear both?