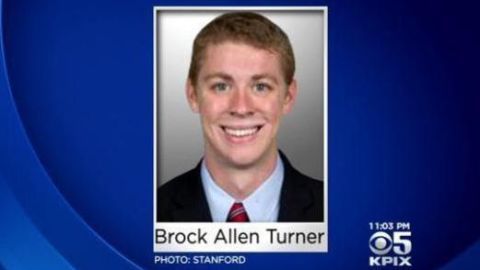 In January of 2015, then Stanford swimmer, Brock Allen Turner, was seen raping an unconscious woman behind a dumpster on campus. Although he was found guilty of three counts of sexual assault and faced a maximum of 14 years in state prison, Santa Clara County judge Aaron Persky sentenced Turner to only six months in county jail and probation. The judge's reasoning? He said the longer sentence would have a "severe impact" on the champion swimmer.

The victim, a now 23-year-old woman, began by detailing the evening of the assault. She decided to attend a Stanford fraternity party with her younger sister:

Your Honor, if it is all right, for the majority of this statement I would like to address the defendant directly.You don't know me, but you've been inside me, and that's why we're here today.

On January 17th, 2015, it was a quiet Saturday night at home. My dad made some dinner and I sat at the table with my younger sister who was visiting for the weekend. I was working full time and it was approaching my bed time. I planned to stay at home by myself, watch some TV and read, while she went to a party with her friends. Then, I decided it was my only night with her, I had nothing better to do, so why not, there's a dumb party ten minutes from my house, I would go, dance like a fool, and embarrass my younger sister. On the way there, I joked that undergrad guys would have braces. My sister teased me for wearing a beige cardigan to a frat party like a librarian. I called myself "big mama", because I knew I'd be the oldest one there. I made silly faces, let my guard down, and drank liquor too fast not factoring in that my tolerance had significantly lowered since college.The next thing I remember I was in a gurney in a hallway. I had dried blood and bandages on the backs of my hands and elbow. I thought maybe I had fallen and was in an admin office on campus. I was very calm and wondering where my sister was. A deputy explained I had been assaulted. I still remained calm, assured he was speaking to the wrong person. I knew no one at this party. When I was finally allowed to use the restroom, I pulled down the hospital pants they had given me, went to pull down my underwear, and felt nothing. I still remember the feeling of my hands touching my skin and grabbing nothing. I looked down and there was nothing. The thin piece of fabric, the only thing between my vagina and anything else, was missing and everything inside me was silenced. I still don't have words for that feeling. In order to keep breathing, I thought maybe the policemen used scissors to cut them off for evidence.

She goes on to talk about how she learned about her own sexual assault while reading the paper; about how two Swedish students on bikes saw her lifeless body being attacked and pulled over to help her.

Your attorney has repeatedly pointed out, well we don't know exactly when she became unconscious. And you're right, maybe I was still fluttering my eyes and wasn't completely limp yet. That was never the point. I was too drunk to speak English, too drunk to consent way before I was on the ground. I should have never been touched in the first place. Brock stated, "At no time did I see that she was not responding. If at any time I thought she was not responding, I would have stopped immediately." Here's the thing; if your plan was to stop only when I became unresponsive, then you still do not understand. You didn't even stop when I was unconscious anyway! Someone else stopped you. Two guys on bikes noticed I wasn't moving in the dark and had to tackle you. How did you not notice while on top of me?You said, you would have stopped and gotten help. You say that, but I want you to explain how you would've helped me, step by step, walk me through this. I want to know, if those evil Swedes had not found me, how the night would have played out. I am asking you; Would you have pulled my underwear back on over my boots? Untangled the necklace wrapped around my neck? Closed my legs, covered me? Pick the pine needles from my hair? Asked if the abrasions on my neck and bottom hurt? Would you then go find a friend and say, Will you help me get her somewhere warm and soft? I don't sleep when I think about the way it could have gone if the two guys had never come. What would have happened to me? That's what you'll never have a good answer for, that's what you can't explain even after a year.

She goes on to share about how Turner's story of the evening changed after seeking the counsel of big shot lawyers, and about how his incredibly lenient sentencing is an additional trauma in the whole awful ordeal.

I strongly suggest you read the entire letter here.