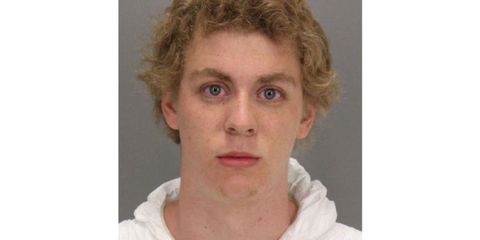 In the victim's powerful closing statement from the Stanford rape case, she voiced extreme disappointment that the man who sexually assaulted her, Brock Turner, had continuously "failed to exhibit sincere remorse or responsibility for his conduct," both throughout the trial and in his defendant's letter to the judge. Now, nearly a week after Turner was sentenced to six months in jail, a part of the letter that persuaded Judge Aaron Persky to give him such a lenient sentence has been obtained by The Guardian—and it proves just how much Turner is in denial.

Blaming the assault on "the influence of alcohol" and "party culture," not once does Turner directly admit to what he's done or take accountability for his actions in the letter. Beginning by discussing how the night of January 17th has affected him, Turner then delves into how he plans to be a better person in the future: by avoiding alcohol.

"At this point in my life, I never want to have a drop of alcohol again. I never want to attend a social gathering that involves alcohol or any situation where people make decisions based on the substances they have consumed. I never want to experience being in a position where it will have a negative impact on my life or someone else's ever again. I've lost two jobs solely based on the reporting of my case. I wish I never was good at swimming or had the opportunity to attend Stanford, so maybe the newspapers wouldn't want to write stories about me."

Throughout the letter, Turner references his former career as a promising athlete, and how much he's lost because of the trial. However, he continues to place the blame on alcohol and "peer pressure," claiming that college culture is what got him into this situation, rather than the fact that he sexually assaulted an unconscious woman behind a dumpster.

"I've been a goal oriented person since my start as a swimmer. I want to take what I can from who I was before this situation happened and use it to the best of my abilities moving forward. I know I can show people who were like me the dangers of assuming what college life can be like without thinking about the consequences one would potentially have to make if one were to make the same decisions that I made. I want to show that people's lives can be destroyed by drinking and making poor decisions while doing so. One needs to recognize the influence that peer pressure and the attitude of having to fit in can have on someone. One decision has the potential to change your entire life. I know I can impact and change people's attitudes towards the culture surrounded by binge drinking and sexual promiscuity that protrudes through what people think is at the core of being a college student."

"I've been shattered by the party culture and risk taking behavior that I briefly experienced in my four months at school. I've lost my chance to swim in the Olympics. I've lost my ability to obtain a Stanford degree. I've lost employment opportunity, my reputation and most of all, my life. These things force me to never want to put myself in a position where I have to sacrifice everything. I would make it my life's mission to show everyone that I can contribute and be a positive influence on society from these events that have transpired. I will never put myself through an event where it will give someone the ability to question whether I really can be a betterment to society. I want no one, male or female, to have to experience the destructive consequences of making decisions while under the influence of alcohol. I want to be a voice of reason in a time where people's attitudes and preconceived notions about partying and drinking have already been established. I want to let young people know, as I did not, that things can go from fun to ruined in just one night."

Ultimately, Turner believes that he can help contribute to society moving forward by educating other students about "the destructive consequences of making decisions while under the influence of alcohol." But as the victim in the case told The Guardian, this line of thinking completely misses the point, and only further helps to fuel rape culture and the normalization of victim-blaming.

"People need to know that this way of thinking is dangerous," she said. "It's threatening. More than my emotions, it's my safety, everyone else's safety. It's not just me feeling sad and defeated. It's honest fear."

You can read the rest of Turner's statement over at The Guardian.