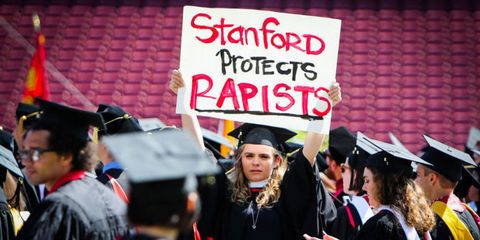 New details about Brock Turner's life pre-Stanford—and pre-sexual
assault—have emerged, and it seems friends who knew him aren't
incredibly surprised to find out about his crimes.

According to an investigation by In Touch, the women's swim team at Stanford were wary of
Turner (a member of the college's men's swim team) long before he
sexually assaulted an unconscious woman behind a dumpster last January.
"Brock's arrest wasn't surprising to anyone on the team," an anonymous
swim team insider told In Touch.
"From the beginning, the women swimmers had found him very, very odd.
Brock would make comments to the women such as 'I can see your t---s in
that swimsuit."

In an even more disturbing detail, In Touch's source says the women from the swim team tried to come forward during Turner's trial and tell the judge about some of the negative experiences they'd had with him. But those discussions and the possibility of sending letters to the judge were apparently halted.

"There were rumblings that the women were pressured by Stanford
officials not to do it since they hadn't witnessed any crime that Brock
had committed," the source said.

Jonathan Fiske, a graduating student who helped organize the graduation protest, told the Washington Post that he, and many other students, believe part of the reason Turner's sentence was so light is because Stanford didn't want a "big PR issue."

"We're using momentum from this case to bring light to broader
issues," Fiske told the Post. "It's a big PR issue. Stanford likes to keep this pristine image and sweep things under the rug."

Several of the character reference letters written for Turner argue that he wasn't the sort of guy you would expect to drink heavily to the point of
making bad decisions, like choosing to rape an unconscious woman in a
secluded area outside of a party. One of those letters came from
Turner's childhood friend, Leslie Rasmussen (who's since apologized
for her letter, because in it, she blamed the victim and not Turner for
his crime). In Rasmussen's letter, which we now know Persky based much
of his judgment on, she writes
that she couldn't have imagined Turner committing a crime like the one
he was unanimously convicted of.  "If I had to choose one kid I
graduated with to be in the position Brock is, it would have never been
him," she wrote. "Brock is not a monster."

But according to details that emerged during the In Touch
investigation, high school friends of Turner's aren't so surprised to
find him in the position he's currently in (that of a convicted rapist).
Mark Otto, who told In Touch he went to high school with Turner at Oakwood High School in Ohio, said the environment they grew up in is conducive to the sort of ignorance that might lead to the sort of behavior exhibited by Turner. "The thing about Oakwood, Ohio is that people live in a very sheltered bubble,"
Otto said. "There's a lot of ignorance, and no willingness to change or
learn."

Otto added that people in their hometown are more upset that Turner's swimming career is over than that he sexually assaulted a woman who couldn't consent to anything he was doing that night last January. "I think his white male privilege
is giving him this lenient sentence, the whole situation is just
surreal," one former classmate, who asked to remain anonymous, told In Touch.

Several sources also told In Touch that the claims he made to his probation officer about not having a history of party going or drinking were lies. "In high school, Brock hung out with tons of kids who drank excessively," one former high
school classmate told In Touch. "College was definitely not his first time experimenting with drugs or alcohol."