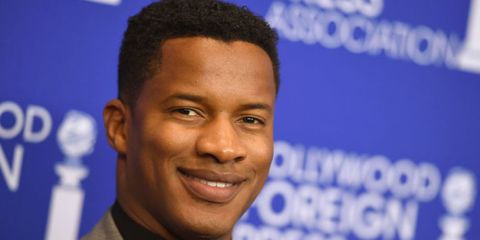 A 17-year-old rape accusation and recent reports that the female accuser who continued to be haunted by the case died by suicide in 2012 has cast a shadow over Nate Parker's upcoming The Birth of a Nation, a film that was expected to be one of the year's most important.

The Birth of a Nation, a drama about Nat Turner's 1831 slave rebellion, has been pegged as an Academy Awards candidate since its award-winning debut at last January's Sundance Film Festival, where it fetched a record $17.5 million acquisition price from Fox Searchlight. Parker stars in, co-wrote, co-produced, and directed The Birth of a Nation, which some believe will help sweep in a more diverse field of Oscar nominees, along with providing a breakthrough for Parker.

But after a handful of trade interviews in which Parker discussed the rape charges he faced and was then acquitted of as a student at Penn State University in 1999, Parker's past is what's drawing headlines well before the October release of the movie. Attention has only intensified with the news Tuesday from The Hollywood Reporter and Variety that the accuser, who was not named, killed herself in 2012 at the age of 30 after a few prior attempts that same year, according to court documents.

Late Tuesday, Parker posted an essay on his Facebook page in response to the latest developments. "I myself just learned that the young woman ended her own life several years ago and I am filled with profound sorrow," Parker wrote. "I can't tell you how hard it is to hear this news. I can't help but think of all the implications this has for her family."

The woman's family issued a statement to the New York Times on Tuesday as well, noting that while appreciative that the men are "being held accountable for their actions," they are "dubious of the underlying motivations that bring this to present light after 17 years." The family said they "will not take part in stoking its coals" and asked for privacy on behalf of the woman's son.

As a 19-year-old wrestler at Penn State, Parker and his roommate Jean Celestin (who has a story credit on The Birth of a Nation) were charged with raping the 18-year-old student. The woman said she was unconscious at the time and didn't consent to the sex. Parker, who testified that he and the woman had previously had sex, and Celestin maintained that it was consensual. He reiterated this point in his post Tuesday night.

Parker was acquitted in 2001. Celestin was convicted of sexual assault, but that was later overturned when the woman opted not to testify again for a 2005 retrial. She sued Penn State and was awarded a settlement out of court. Her suffering reportedly continued, however. The Hollywood Reporter on Tuesday spoke to S. Daniel Carter, a sexual assault victim advocate, who said the accuser was "tormented" by "the constant contact and fear of seeing her assailants on campus."

The accuser's brother, identified only as Johnny, also spoke about his sister. "If I were to look back at her very short life and point to one moment where I think she changed as a person, it was obviously that point," Johnny told Variety. "The trial was pretty tough for her."

After the trial, Johnny said, his sister moved around frequently and became a mother to a son with her boyfriend. "I think the ghosts continued to haunt her," he said.

The case largely escaped notice at Sundance, but in a pair of trade interviews published Friday, Parker confronted it straightforwardly. "I was sure it would come up," Parker told Deadline. "I stand here, a 36-year-old man, 17 years removed from one of the painful moments in my life. And I can imagine it was painful for everyone. I was cleared of everything, of all charges. I've done a lot of living, and raised a lot of children. I've got five daughters and a lovely wife."

Parker's Facebook post took on a graver tone. He noted that it was not an attempt to "solve this with a statement" but merely a response to the moment. "I cannot change what has happened. I cannot bring this young woman who was someone else's daughter, someone's sister, and someone's mother back to life," he wrote. "I have tried to conduct myself in a way that honors my entire community—and will continue to do this to the best of my ability."

In the bright spotlight of Hollywood's awards season, far less has hurt a film's chances with Oscar voters. On the other hand, Parker wasn't found guilty, and he has faced the case more directly than some Hollywood stars have in the past. "I have never run from this period in my life and I never ever will," he wrote.

A lot is on the line for Fox Searchlight, which paid more for The Birth of a Nation than any previous Sundance film. The movie's striking poster features Parker as Turner with a noose made out of an American flag. The film will play in September at the Toronto International Film Festival.

In an earlier statement, Fox Searchlight, which has not yet responded to the latest developments, said: "Fox Searchlight is aware of the incident that occurred while Nate Parker was at Penn State. We also know that he was found innocent and cleared of all charges. We stand behind Nate and are proud to help bring this important and powerful story to the screen."

This content is created and maintained by a third party, and imported onto this page to help users provide their email addresses. You may be able to find more information about this and similar content at piano.io
Advertisement - Continue Reading Below
More From Culture
The Sexiest New Movies of the Year
Meet the Cast of 'Ginny and Georgia'
Advertisement - Continue Reading Below
40 Secrets From the 'Bachelor in Paradise' Set
Pre-Order These Highly-Anticipated 2021 Books
The Best Shows to Stream on Every Platform
A Look Back at Princess Anne's Life in Photos
Where Is the Cast of 'Gilmore Girls' Now?
The Top-Grossing Book-to-Movie Adaptations
Historical Films to Stream If You Loved 'Hamilton'
Meena Harris and 'Bridgerton' Collab for Merch