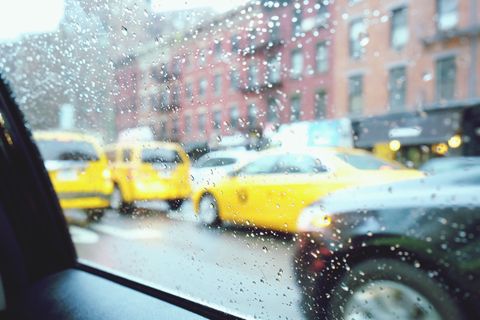 Racism in transportation is so embedded in American life that it became a movie trope: In Down to Earth, Chris Rock realizes he's "a black man again" when he tries to hail a cab and three in a row blow right past him. So maybe it shouldn't be a surprise that newer modes of getting around, such as Uber and Lyft, have kept this unfortunate pattern alive.

A study from the National Bureau of Economic Research out today indicates that black riders are more likely to have to wait longer or face driver cancellation than their white counterparts. Women, too, are treated differently: Drivers are more likely to make advances towards them or take them on longer routes to their destinations as a way to increase the fare.

The study monitored almost 1,500 rides in Seattle and Boston over the course of two years. In Seattle, University of Washington undergraduates were given identical phones pre-loaded with transportation apps and a predetermined set of routes. They kept track of when they requested a ride, when a driver accepted it, when the driver arrived, and when they reached their destinations. The researchers found that it took UberX drivers up to 35 percent longer to accept black riders' requests than it did for their white counterparts.

Getty Images
For the Boston riders, the Bureau used a previous study it conducted as a model. In that study, it sent two identical resumés to various employers—one with a "white-sounding" name, one with a "black-sounding" name. The latter resumes received callbacks around a third less often. In this case, researchers set up two accounts for each study participant along the same lines. Participants were recruited "whose appearance allowed them to plausibly travel as a passenger of either race."

Meanwhile, female riders' experiences diverged from their male counterparts once they got in the car. Their trips tended to be 5 percent longer, particularly when drivers were "chatty."

Apparently, technology won't fix all our problems—like, say, racism. Or unwanted attention or advances from a complete stranger offering you a service. After all, you can't book an Airbnb without facing discrimination, either.

This content is created and maintained by a third party, and imported onto this page to help users provide their email addresses. You may be able to find more information about this and similar content at piano.io
Advertisement - Continue Reading Below
More From Culture
Halloween Costumes You Can Wear for Work Zooms
'Empire Records' Helped Me Understand My Queerness
Advertisement - Continue Reading Below
Iconic '90s Movies to Binge-Watch Right Now
HBO Is Giving Fans a Special 'Euphoria' Episode
Horror Movies Even Scaredy Cats Can Watch
Who's Who In 'The Haunting of Bly Manor'
Avengers Fans, Assemble: 'WandaVision' Is Coming
There Was a 'Friends' Reunion at the Emmy's
When Is 'Schitt's Creek' Coming to Netflix?
The 2020 Emmys Had a Confusing Vibe