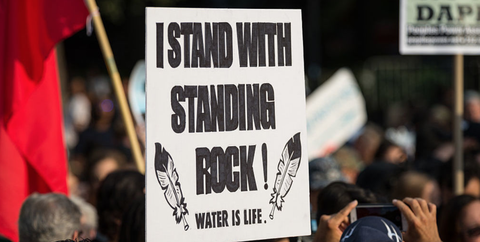 As federal officials ask for more time to make a final decision on the Dakota Access Pipeline, police and protestors continue their standoff on government-owned property near the tribal lands of the Sioux nation in Standing Rock, North Dakota. Activists are concerned that the pipeline, which would run underneath the tribe's main source of water, could potentially contaminate the water.

Earlier this week, police used tear gas, rubber bullets, and water hoses on protestors in freezing temperatures—potentially life-threatening actions that tribe members are calling an "act of war." Protestor Sophia Wilansky claimed officers threw a grenade at her, while police believe she was hurt by an explosion caused by protesters. Doctors say they may have to amputate her arm as a result of the injury she sustained at the protest. Now, protestors, who declare themselves "water protectors," are calling for a week of action starting Nov. 25 and culminating with a global day of action on Dec. 1. Until then, here are some of the actions you can take to support protestors and say "no" to DAPL:

Contributions to Sacred Stone Camp's GoFundMe campaign go towards water, food, blankets and other essentials necessary for the campers to live on the land while they're protesting.

The Sioux tribe has filed a lawsuit contesting the pipeline, but they're up against energy companies with deep pockets and powerful investors. Make a contribution to their legal defense fund via Fundrazr.

Call the state and county officials responsible for dispatching police to Standing Rock to let them know that the public will hold them accountable for their actions.

Last night at Standing Rock: Yesterday afternoon sometime before sunset, water protectors worked to break down the police barricades that block highway 1806. We were met with water hoses from fire trucks with which police sprayed high-pressure water at protectors in below-freezing temperatures. By the time I arrived, people were already being evacuated due to blood-loss after being hit with any number of weapons that were repeatedly deployed on us. Rubber bullets, bean bag rounds, FLARES, tea gas canisters. 20+ tear gas canisters were thrown by police into the crown of water protectors while we were on the bridge. Hundreds of people were blinded and disabled by the tear gas, many puking as they stampeded away from the barricade with no where to go as under the bridge is the freezing waters of the Missouri River which we are here to protect. I was hit with a rubber pellet and luckily had just grabbed a plastic bin lid that i was able to use to take some of the force. The rubber bullet pierced a hole through the lid. Later I held a line of tarps while police continue to spray water on the protectors and specifically aimed at fires that were made by the medics in order for people to warm, as there is no where to dry off out or warm out here other than by a fire. Police repeatedly attempted to extinguish these medic fires, while water protectors slung driftwood across the frozen river in attempt to keep the fires going. This abuse by police lasted well past midnight, and people were still fighting this morning when I woke up. Medical supplies have been extremely depleted due to the 200+ people (of all ages and races and genders) that were in need of medical assistance. Multiple people left the scene in ambulances. If you are looking to donate, check out the MedicHealerCouncil.com/donate or donate to my fund which I’ll be using to buy waterproof suits, goggles, and gas masks for those on the front line. The police brutality is it’s own issue here separate from race and the pipeline. Please check out all the live feeds you can find to better understand what we are experiencing here. Look at the icicles on the razor wire barricades. This photo was shot by @steffikeith.

4) Send them something they need.

As temperatures continue to plummet, water protectors need snow gear and camping supplies, in addition to items like body cameras and pepper spray decontamination wipes. You can find everything on their Amazon Wish List.

These financial institutions are among the most heavily invested in the pipeline, according to the New York Times. (Sacred Stone Camp recently tweeted that Norwegian Bank DNB is already considering divesting from the pipeline.)

Cities around the country including New York, New Orleans, Kansas City and D.C. have recently hosted events. Check social media to find one near you.

They're in need of people with legal and media skills. Get in touch via email (sacredstonecamp@gmail.com) or by phone: 701-301-2238.