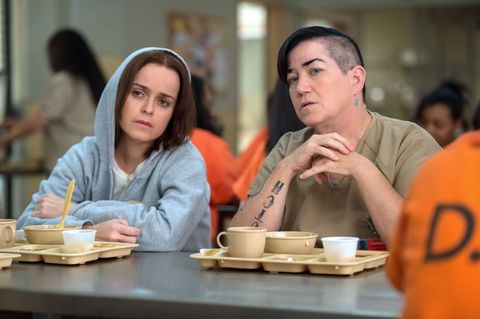 Orange is the New Black left us on a rather emotional and intense note at the end of season four.

And it looks like the next season is going to be pretty intense too as it will be squeezed "over the course of three days" across 13 episodes, according to one of its stars.

"It will be very detailed, very intense. You better get ready, get your popcorn, your tissues," Danielle Brooks (aka Taystee) told E! at the SAG Awards last night.

But Danielle was less clear about a possible premiere date for season five, adding: "I don't know when it's coming out because they don't ever tell us, but sometime in the summer."

The previous seasons have taken place of an indeterminable period, though this revelation suggests the next series of episodes will address that heartbreaking season four ending (spoilers).

The Netflix show picked up the Best Comedy Ensemble award for the third year in a row at last night's SAG Awards.

In an acceptance speech, star Taylor Schilling praised the diversity of the cast in the wake of the current political climate.

"And we know that its going to be up to us, and all of you probably too... to keep telling stories that show that what unites is stronger than the forces that seek to divide us."