When Kathryn Newton was approached about returning to Big Little Lies for the HBO show’s second season, she was ecstatic. She was also torn. “I got offered Pokemon: Detective Pikachu and they were conflicting, schedule-wise,” she tells me. Newton desperately wanted to pay homage to the anime she’d loved—“I would get lost in it all day long”—but playing Abigail Carlson on the show’s first season, an adaptation of Liane Moriarty’s 2014 novel, was a dream come true.

Leave it to fairy godmother Reese Witherspoon, who plays Newton’s mom Madeline on Big Little Lies, to handle everything. Newton says that Witherspoon insisted she do both, and then personally put in a call to Universal Studios. Just like that, there were no more scheduling issues.

Though the incident proves Newton is protégé to one of Hollywood's most beloved stars, the 22-year-old isn’t new to the cinematic scene. She’s been acting since she was four, moved to L.A. from South Florida when she was 12, and took on her first big league fare in 2017, with roles in both Lady Bird and Three Billboards in Ebbing, Missouri—and, of course, the first season of Big Little Lies. (Her character, Abigail, infamously attempts to raise funds for Amnesty International by selling her virginity online—news that causes her mother to projectile vomit during a sit-down lunch.) But she’s used to keeping busy: Newton is also a lifelong golfer, and is considered by Golf Digest to be “the best golfer in Hollywood.”

Since there isn’t a second Big Little Lies book and the first season of the show wrapped up where the novel’s source material left off, how the second season will shape up is anyone’s guess—though that hasn’t stopped internet sleuths from speculating wildly. “I’m really not allowed to say anything,” Newton demurs when asked about her season two storyline, though she does reveal that it’s the darkest acting she’s ever done. “We have a take where [director Andrea Arnold] would play a sad song on repeat for, like, eight minutes, and would just roll the camera on me, like, bawling-crying,” she remembers. “I grew a lot.”

As for her megastar castmates—among them Nicole Kidman, Laura Dern, and Shailene Woodley—Newton grew especially close to them during the filming of season two. For this, she also thanks Witherspoon. “I’m in a room with the biggest stars in Hollywood, and she’s the one who would invite me to dinner with them,” she says.

“We all love each other. I loved every minute of working on that show,” Newton reminisces, adding, “I hope they’re going to do a third season.”

In the meantime, fans are abuzz about the new season’s casting of Meryl Streep, who joins BLL as the mother of abusive husband Perry Wright, who—spoiler alert!—died in the first season. So what was it like to work alongside the most famously excellent actress of her generation? “I don’t know how you can begin to answer that,” laughs Newton. “I was like, Oh! This is why she’s the greatest.”

And what about that Detective Pikachu movie that Witherspoon helped her work into the schedule? In the film, which hits theaters May 10, Newton plays Lucy Stevens, who teams up with lead character Tim Goodman (Justice Smith) and his Pikachu (Ryan Reynolds) to find Tim’s missing dad.

I ask the question that divided the internet: With Ryan Reynolds as the titular character, is the mouse detective kind of...hot? “Hot?” Newton responds incredulously. “Like, H-O-T?” Yes, hot. She starts laughing. “I totally see it,” she says. “I’m excited to hear what they say about my sidekick, Psyduck. I think he’s pretty handsome too, okay?”

This article originally appeared in the May 2019 issue of Marie Claire. 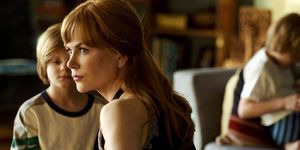 7 Questions After the 'Big Little Lies' Finale
Reese Witherspoon Created a Dress for 'BLL' Fans
This content is created and maintained by a third party, and imported onto this page to help users provide their email addresses. You may be able to find more information about this and similar content at piano.io
Advertisement - Continue Reading Below
More From Culture
Could 'Manifest' Come Back for a Fourth Season?
'Bachelor In Paradise' 2021: Everything We Know
Advertisement - Continue Reading Below
Hang On, What's "ROC" at the Olympics?
Obsessed With the Olympics? Read These Books
The 'Friends' Cast Just Dropped Iconic Merch
Twitter Is Obsessed With Greg on 'Bachelorette'
You're About to Hear a Lot About Athing Mu
Meet the Cast of Katie's 'Bachelorette' Season
Blake Moynes Has a Thing For 'Bachelorette' Leads
'Skye Falling' Should Be on Your Summer TBR List