The battle for the Iron Throne may be coming to a climax in the eighth and final season of Game of Thrones, but there’s only one game that I’m interested in on this mid-April day. It’s the most challenging game of all—The Game of Friendship. And if anyone from the HBO family knows about friendship and respect, it's that gangly fur monster called Elmo.

While the rest of Westeros is caught in some accidental incest, Elmo is doing the Lord’s work out here and forging a truce between bitter rivals and siblings Cersei and Tyrion Lannister. In a new clip from HBO, Elmo wiggles up to the table on a mission to forge good will within the Lannister family. Good luck with that, Elmo.

Taking a page out of no one else’s book in the series, Elmo quite forcefully (you know, for Elmo) lays down the law: “Elmo thinks that you two need to respect each other!” Then he explains how the two can be better friends because when we're working together, we're stronger. We need more Elmos in this damn world.

In GoT reality, Elmo would have already been decapitated, dismembered, turned into wall art, and set on fire at this point because you know that fur isn’t flame retardant, but in this perfect universe, Tyrion and Cersei agree to call a truce and work on becoming friends. The whole clip is adorable, but the image of Lena Headey making hard eye contact with Elmo as he refers to her as Ms. Cersei will be seared into all of our minds for eternity.

Just for kicks, follow Elmo’s lead today. Don’t waterboard your adversaries with wine, but instead share it with them. Unless your friend is Elmo, in which case, get the man some toast. Elmo loves toast. 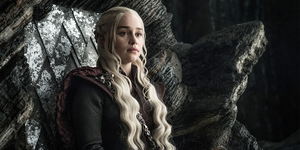 A Guide to the Best Castles on 'Game of Thrones'

Justin Kirkland Justin Kirkland is a writer for Esquire, where he focuses on entertainment, television, and pop culture.
Advertisement - Continue Reading Below
More From Culture
Candice Marie Woods on Playing Diana Ross
45 Iconic '90s Movies to Binge-Watch Right Now
Advertisement - Continue Reading Below
You Can Get a ‘Golden Girls’ Birthday Party Kit
Meet the Star of 'The Bachelor's ChampagneGate
Hannah Ann Sluss From 'Bachelor' Was a Model
Who Is 'Bachelor' Peter's Mom Talking About?
Who Is Hannah Ann Sluss From 'The Bachelor'?
Who Is 'Bachelor' Contestant Victoria Fuller?
Who Is 'Bachelor' Contestant Madison Prewett?
Who Are the Women of 'The Bachelor' in 2020?