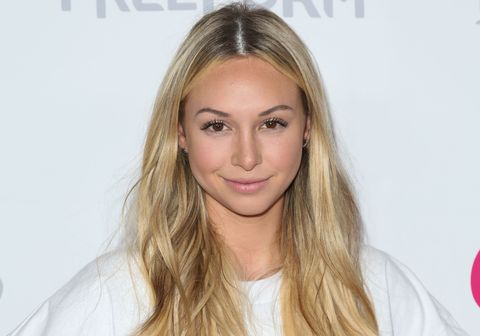 All of the shows in the Bachelor franchise have messiness encoded in their DNA, but something totally out of the ordinary just happened with the upcoming fourth season of Bachelor in Paradise. The season, which puts contestants from other Bachelor and Bachelorette seasons together in Sayulita, Mexico to make another bid at love, had started filming but was abruptly suspended early on.

In a statement, ABC shared, "We have become aware of allegations of misconduct on the set of Bachelor in Paradise in Mexico. We have suspended production and we are conducting a thorough investigation of these allegations. Once the investigation is complete, we will take appropriate responsive action."

Long-time Bachelor Nation fans might've realized something was up when current Paradise contestants like Corinne Olympios started posting on their social media accounts—a big no-no for folks in the midst of filming.

Additionally, other eagle-eyed fans spotted the entire current Paradise cast at Puerto Vallarta Airport on Sunday, minus two faces: Olympios and recent Bachelorette castoff DeMario Jackson. The rest of the cast members were reportedly told that they were being flown to Houston.

But while Warner Bros., which produces the show, and host Chris Harrison haven't peeped a word to set troubles, sources within the show's production have reached out to drop some knowledge as to what's going on.

Amy Kaufman, a film writer with the Los Angeles Times, reported behind-the-scenes allegations from an anonymous source, through her Twitter account:

"I just spoke to a source who says he knows why 'Bachelor in Paradise' was just canceled. Here we go:

The following day, Monday, a producer who witnessed this hook-up did not show up to work. According to my source, this producer went on to sue the production for misconduct over what she witnessed between DeMario and Corinne. DeMario and Corinne were both shown footage of their hookup during their interviews in the days following their rendezvous.

My source was told a producer filed a 'third party complaint,' to clarify my above comment."

My source was told a producer filed a "third party complaint," to clarify my above comment.

Reality Steve (Steve Carbone), a Bachelor blogger known for spoiling the series, also passed along information that Olympios and Jackson are the ones involved in the alleged inciting incident.

"From I've been told, the show has been canceled. They're done. Everyone's being sent home. DeMario & Corinne are the contestants in question. Details are still sketchy, but this is not a good situation. I'm not at liberty to throw accusations out. But yeah, drinking, sex, cameras, etc. You get the picture. This is a real shitty situation to be honest. I don't know enough details to speculate. Just know it involves DeMario & Corinne.

I know you're immediately thinking the worst. I honestly don't think it's that. At least not what I heard. From what I was told, no one involved was hurt. Production had to stop, the show is basically canceled & there's an investigation going on. Don't know all the details. Hopefully for all parties involved it gets resolved. But certainly doesn't look like BIP is happening."

Don't know all the details. Hopefully for all parties involved it gets resolved. But certainly doesn't look like BIP is happening.

It's unclear what exactly will happen to the just-started season footage, or if/when the season's shooting will be picked up again. The fourth season of Bachelor in Paradise was slated to start broadcasting August 8.