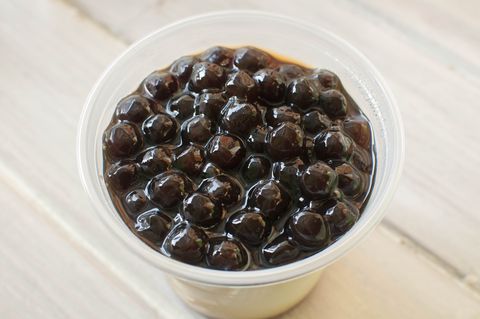 Chances are, you know what bubble tea is. But if you don't, I'll let you in on this refreshing drink you have to try for yourself. Bubble tea usually contains some kind of tea, flavoring, sugar and the main ingredient tapioca balls, sometimes known as boba or the bubble in "bubble tea." Tapioca balls are the round, chewy things you find at the bottom of the tea. Once you have bubble tea, you'll probably want to have it all the time. Word of warning, though: One girl's bubble tea habit reportedly landed her in the hospital. According to Shaoxing News, a teen amassed about 100 undigested bubble tea balls inside of her stomach.

The doctor reportedly made the discovery when the girl was brought to the hospital by her parents. She had been complaining about severe stomach pains and constipation before she was admitted. In order to properly diagnose her, the doctor at Zhuji's People Hospital in the Zhejiang Province of China ordered a CT scan. According to the news report, the doctor noticed that the girl's stomach was bloated and that was cause for concern.

When the results of the test came back, the scans showed that the teen's digestive track was lined with "granular shadows," according to Shaoxing News. The doctor then asked the teen if she had recently eaten anything that would cause those shadows. The teen responded that she had drank bubble tea days before the hospital visit, but the doctor thinks it was a lot more than just one.

A teenager addicted to bubble tea was left in agony after more than 100 bubble tea "pearls" accumulated inside her! https://t.co/vtgT3sU4Ny pic.twitter.com/qSHdXEEaTW

He advised the family that a bubble tea habit likely caused the buildup of tapioca balls inside the girl's stomach. Also, according to the x-ray provided by Shaoxing News, it appears that the girl may have been swallowing the boba whole, which is probably a choking hazard and not great for your digestion. Luckily for the girl, the treatment was pretty minor. The doctor prescribed her a laxative to flush the tiny balls out of her system.

Don't worry, though. This doesn't mean you have to quit drinking bubble tea. Chances are you're probably not ingesting enough to end up in the hospital like this teen. Just maybe don't swallow the boba whole?

Related Stories
Elevate Your Next Toast With a Champagne Cocktail