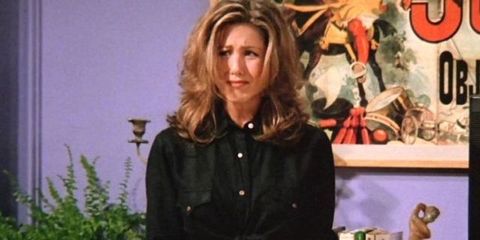 We only just recovered from the theory alleging that Phoebe from Friends is actually an addled meth addict, and now there's this Starbucks-themed one to contend with.

Thanks to radio and TV presenter Alex Baker, we've been left with the notion that Friends was actually just a vehicle for Starbucks to brainwash people into spending a fortune on beverages that don't even get them drunk. (FOOLS.)

Alex writes: "Wouldn't it be mad, if we found out that Friends (as in 'THE WHOLE TV SERIES') was just an elaborate stage-setter for Starbucks.

"An elaborate, meticulously-planned priming exercise to manipulate human behaviour, getting them away from pubs (Cheers) and into coffee shops (Friends)."

Alex then explains that he's going to go through all 10 seasons of Friends in order to find some supporting imagery, before pointing out that Rachel's surname is "Green," which is the main color of Starbucks' logo, and suggesting that Rachel's hair looks a lot like the logo, too.

His theory delves deeper, even looking at links between Moby Dick, Starbucks and Friends, as well as the German word "Gellen."

Check it out for yourselves below–it's far too complicated for us to relay accurately:

How's THIS for a conspiracy theory! #Friends #Starbucks

We wonder if Friends co-creator Marta Kauffman thinks it's nonsense or not, since she wasn't convinced when she was told about the Phoebe one.