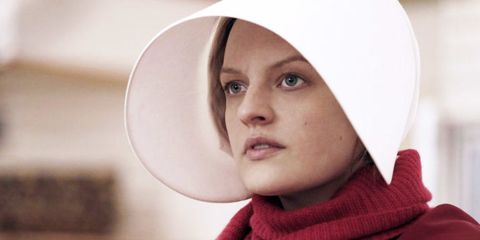 The first season of Hulu's The Handmaid's Tale came to a stunning conclusion recently, as Nick, using his privileges as an Eye, removed pregnant June from the Waterfords' home, ushering her toward a fate unknown. While it's a relief to come up for air after 10 hours exploring Gilead's horrors, we're more curious than ever about the fate of its inhabitants—especially since the the show has technically reached the end of its source material, Margaret Atwood's 1985 novel of the same name.

Hulu picked up the series for a second season—to air in 2018—just days after the first three episodes premiered, so you can rest assured its producers, writers and cast were already thinking about the future long before the season finale aired. Showrunner Bruce Miller promises, "The world can get a lot bigger," so here, we're looking at all the clues those closest to the show have dropped surrounding Season 2.

1) Atwood's vision for the future of her characters will play heavily into Season 2. "I think [my participation] will be more involving in the second season because we will be in uncharted territories so more invention will have to take place," she told EW. Miller echoed that to THR, noting that Atwood has had a long time to think about what happened to her characters after the book's conclusion.

2) June (Elisabeth Moss) isn't going anywhere, of course—and most of your favorite characters will be back, too. "Offred being pregnant, her being dragged off were all parts of that tantalizing and frustrating ending [in the book]," Miller said. "So now we get to go down that road and we get to explore that. But certainly the people that we met and the situations we got into and the things that Margaret Atwood set up in Season 1 are not going away."

3) June is done being passive. "Season 2 is what happens after you become a little rebellious," Miller told EW.We already saw June say no to Aunt Lydia (Ann Dowd) in the season finale, dropping her rock instead of stoning poor Janine to death. This seems to be the point of no return for June.

4) It will be even darker than Season 1. "It's going to get worse," Moss told The Pool. Does that mean we'll be saying goodbye to some favorites for good?

5) It will have 13 episodes instead of 10. Season 2's story arc is already lengthier than Season 1's, and it will be interesting to see how much of the season will be set in the present day versus flashbacks.

6) It will be more intersectional. A major complaint surrounding The Handmaid's Tale's first season was its refusal to acknowledge race within Gilead while cherrypicking plot points from the real experiences of enslaved people. Angelica Jade Bastién at Vulture argues, "[The show is] more concerned with the interiority of white women at the expense of people of color who recognize that Gilead isn't a possible horrifying future, but the reality of what America has always been," while Cate Young at Cosmopolitan.com calls it a "profound failure of storytelling." Miller told Inverse he saw the critiques and conversation on Twitter and is working to make amends: "The thoughtful conversations online really inspired a lot of thoughtful conversations in the writers' room about this," he said. "It's always hard to add another topic that is complicated and deserves real attention, but we're up to the challenge."

8) Rita (Amanda Brugel) and the Marthas will play a much larger role in Gilead. Miller says they were purposely made "invisible" in the first season, but they do have "networks" through which they communicate. The final moments of the season 1 finale signal that Rita is involved with Mayday, so it'll be interesting to see whose side she takes if it turns into a Mayday/Handmaid face-off. Rita seems to really care about June, and we can't imagine her killing any of the Handmaids just to show the leaders of Gilead a lesson.

9) June and Nick (Max Minghella) might eventually find Luke—and things could get awkward. She's pregnant with Nick's baby—and beholden to him to keep her safe, for the time being. Meanwhile, Luke is trying to save her and their daughter from Gilead. "She's in this position where she might be in love with two people," Moss told ELLE.com. "I think she does love Nick—if I can speak for her—but I don't know if she knows that she does, yet. But she has a husband who she also loves, who's the father of Hannah, who she also now knows is alive. It's the most complicated Real Housewives episode you've ever seen."

10) Things "get complicated" for Luke (O-T Fagbenle) and Moira (Samira Wiley). Their reunion in Canada at the end of Episode 10 is one of the most moving moments in the series, but that doesn't mean it's a happy ending. Luke will obviously keep searching for June and Hannah, Miller says, while Moira will focus on recovering from her time at Jezebels.

11) Janine will get some sort of closure. We last saw her saved from death by stoning after June took a stand. Will Gilead execute her by other means? Or give her another opportunity to bear more children? "I truly am very curious what happens to her because I immediately think, 'Oh, they'll just kill her,' but then they've got this whole other thing on their hands with the Handmaids dropping the stones," Brewer told Vulture. "What are we going to do with her now? She has two healthy ovaries!"

10) The Waterfords will return. "They're still a part of our plans for Season 2 but in interesting ways," Miller told THR. We'll definitely see more of Joseph Fienne's Fred, in particular: Season 2 wil explore, "What is the commander doing all day long, and what is his life like? What are his responsibilities?" Miller told NYT. As for Mrs. Waterford, Miller says, "I can't imagine Serena's going to be too happy... I wouldn't want to be in that house." What does that mean for Hannah, whom Serena dangled over June's head as collateral for a safe pregnancy in the finale?

12) Aunt Lydia's back story will be explored, as well as the role of the Aunts in Gilead. Praise be, we're getting more Ann Dowd!

13) Alexis Bledel will return as Emily—and a full-time cast member. Hulu announced Bledel has been upgraded to series regular from "guest star" in Season 1. Last time we saw Emily, in Episode 5, she'd been apprehended by Gilead officials after stealing a car and running over an armed guard. It sounds like she survived this ordeal—perhaps she's been sent to the colonies? Miller has already stated he's interested in exploring them. "I am encouraged by the fact that much of my storyline was either newly invented or enhanced from the book, so I think there's certainly a possibility for more," Bledel told HarpersBAZAAR.com in May.

14) Offred's mother will likely appear at some point. She's mentioned in the book and briefly in Episode 7, but there just wasn't enough time to do her justice in Season 1, Miller told THR. "We've been talking about her from day one of Season 1... It's a story we want to tell."

15) We're not done with the flashbacks, which means more opportunities to explore a pre-Gilead world. "I was happily surprised at how well the flashbacks worked for everybody, that they weren't jarring or hard to follow," Miller said. "So because of that we'll definitely do more."

16) The book itself will heavily influence Season 2, so it might be worth a re-read before the show returns. "Everybody says, 'You got to the end of the book!' And I'm like, 'No, there's still a whole bunch of stuff we didn't even touch,' Miller told the NYT. "I read the book a lot. I pick out clues here and there, not so much to alter it, but to say, 'O.K., let's logically extrapolate it.'"

17) The Season 2 premiere already has a plot, and Moss says it's intense. "It's fantastic. I had chills all over my body and my jaw dropped," she told THR.

18) It's probably coming sooner than you think. "We're going back to shoot in September," Elisabeth Moss said. "We don't want to keep audiences waiting that long."