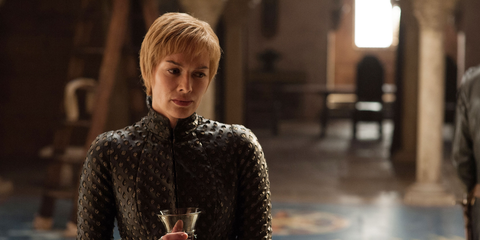 Cersei Lannister is one slick lady. Over the course of seven seasons she's murdered her way out of a loveless marriage, blown up 90 percent of her rivals in 10 seconds flat, and dismantled the religious leadership of her country all the while happily screwing her twin brother and ending up on the Iron Throne. By now we know not to underestimate that evil, wonderful brain of hers, but even a woman with Cersei's intelligence makes mistakes, and in a few throwaway lines from season seven she made one that may cost her the throne and her life.

While Dany and Jon aunt-banged their way to White Harbor, Cersei revealed to Jaime that she has no intention of sending troops north and instead is sending Euron to pick up a band of sellswords called the Golden Company. She also mentioned the Golden Company to Tycho Nestoris, the representative of the Iron Bank who stopped by to shake her down earlier in the season. She's really into these Golden Company fellows, and is definitely counting on their support in the coming wars of season eight, but there's just this one...teeny tiny...itty bitty problem: They're probably already on Jon Snow/Aegon Targaryen's side.

In the A Song of Ice and Fire books, the Golden Company is known as the absolute best army money can buy. They're hereditary sellswords, and are mostly descended from the exiled knights who fought on the wrong side of a skirmish called the Blackfyre Rebellion. The founder of the Golden Company was Aegor Rivers, the legitimized bastard of a Targaryen King, and they've been led by those with Targaryen blood until their fairly recent history.

Always do your research before hiring an army, kids.
HBO

One of the book's major plotlines that so far has been sidelined in the show involves Tyrion Lannister meeting Jon Connington, an exiled lord who was Rhaegar Targaryen's closest friend. Jon Connington is escorting a teenage boy to the Golden Company, where he reveals to the captains that the boy is Aegon Targaryen, Rhaegar's son with Elia Martell. According to Connington, the baby Aegon who was killed by the Mountain when he came for Rhaegar's wife and children was actually another woman's child that Varys had swapped in to protect the real prince. When the Golden Company meets Aegon, they rally to his side according to a secret agreement made when Aegon was a baby, and they abandon a paying contract to fight for him for free.

There is some debate among book-readers about whether or not this Aegon Targaryen is the real deal, but since literally none of this happens in the show it doesn't particularly matter. What does matter is that on Game of Thrones, Rhaegar Targaryen's son Aegon is alive and well in Westeros, and the Golden Company is coming on Euron's ships to help Cersei bump him off. Knowing what we do about the Targaryen-loyal Golden Company, the Queen might be in for a rude awakening when her expensive and powerful army shows up ready to throw down on the other side of the battlefield.

What if they show up with little "We
HBO

Will we get to see the look on Cersei's face when she realizes she's spent all her money on the wrong dudes? How about Euron when he gets extra-murdered in an army-sized betrayal 20 years in the making? Who knows, it's just a theory! Pray to the seven that season eight comes out next year and we'll get some real answers.