~*mild spoilers for Game of Thrones below*~

The last season of Game of Thrones featured some real lady power moments, and one such highlight: Arya Stark and Brienne of Tarth's sparring at Winterfell. The two fan favorites finally faced off in a scene that even inspired its own Star Wars lightsaber-themed remix. 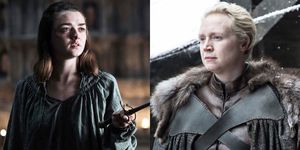 Of course, one might've wondered how the 6'3" Gwendoline Christie, playing a seasoned swordswoman, and the 5'1" Maisie Williams, playing a deadly assassin, convincingly pulled off this fight choreography. Now HBO has pulled back the curtain on the two's fight rehearsals, as part of their ongoing Game Revealed behind-the-scenes series.

Williams, who taught herself to fight as a lefty because Arya's a lefty, shares, "To be fighting Gwen who is far over a foot taller than me and for her to be fighting someone who is far, far shorter than her its been a massive challenge." Christie describes her perspective (which is, to be fair, from a much taller vantage) on the sequence, "We trusted each other." 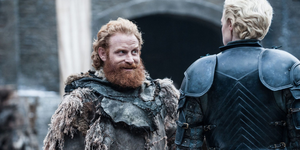 Ultimately, episode director of photography Robert McLachlan puts it best: "I don't think we had to do too much to it to make it very fun to watch, because everybody's wanted to see these two together for a long time."

Watch the two actresses clank swords and trade smiles below: