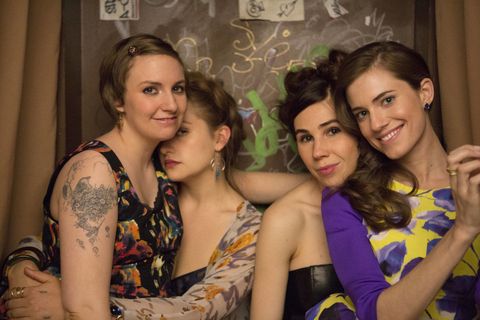 Where we left off: Hannah and Adam reconnect, as do Charlie and Marnie.

Rumor has it: '70s actress Louise Lasser, a Dunham favorite, will guest star.

If you've never seen it: Replace the cosmos with craft beers and the Manolos with thrifted loafers and you have Girls, the Sex and the City for the millenial generation. The show follows four ladies (Hannah, Marnie, Jessa, and Shoshanna) through their Brooklyn-growing pains, including but not limited to bad bowl cuts, sweaty warehouse dance parties, and awkward workplace groping situations. It's addictive, sometimes cringeworthy, and most importantly, relateable.

Advertisement - Continue Reading Below
More From Culture
The Best Korean Dramas to Get You Hooked
87 Movies Everybody Should Watch At Least Once
Advertisement - Continue Reading Below
The Best Documentaries on Amazon Prime Right Now
Heart-Pumping Action Movies Coming Out This Year
The Best TV Shows on Hulu Right Now
The Documentaries You Can't Afford to Miss in 2020
'Killing Eve' Season 3 Review: What's Old Is New
A Super Pink Moon is Coming April 7
Pre-Order These Amazing Books Coming Out in 2020
The 8 Best Rom-Coms of 2020