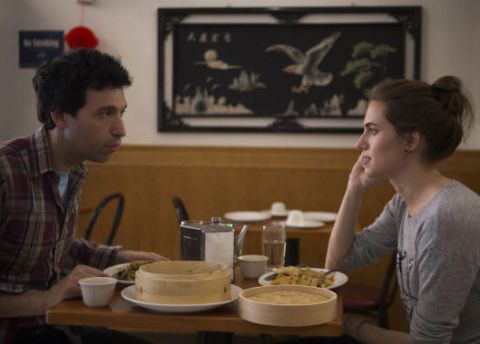 Spoiler Alert! Do not read on if you have not yet watched Girls season 3 episode 6 titled "Free Snacks."

Over the weekend, T Magazine tweeted, "We ask: which female designer understands the modern woman most?" There was a chorus of "Phoebe Philo!" which is a solid answer, but most "modern women" can't afford regular helpings of Celine, dream as we may. So would you say Jenna Lyons might fit? I would. She does seem to understand us, sequined twinsets, chic sweatpants, Liberty of London collabs and all.

The Jenna Lyons fangirling has been going on for a few years now, but if you thought she had reached peak-hype, then that was yesterday, February 9, 2014. Today, she has completed one-third of a three-episode arc on Girls, in which she plays Janice, Hannah's boss at GQ Magazine.

Yes. GQ. Where Hannah now works as an ad-side writer, and not only works, but is much better than all of the other editors and writers at drumming up ideas like "Kewl Dad" (an ironically "Bill Cosbyish" type) and the Kaballer ("he'll fuck some serious enlightenment into you") for the "Field Guide for the Urban Male" advertorial section. Being Hannah, she thinks this is just a passing-the-time gig with good perks and free snacks, because she's a "writer-writer, not a corporate/advertising/working-for-the-man kind of writer." That's how she sees Janice and her colleagues—until she realizes one is a Yale-educated poet, another has contributed to N+1 ("It was sort of an unpacking of the Jersey Shore through an imperialist lens"), and another actually published a Talk of the Town piece in The New Yorker. All I can say is, the Girls writers have done their research, because all of this feels so, so real, except for the free snacks part.

What doesn't ring true is that Hannah just wound up in GQ's cushy lap without any bungled job interviews or botched salary negotiations. Then I remind myself it's because Girls is a sitcom at heart—it's the essence of situational comedy—with each episode better considered as a standalone story. Plot drivers aren't necessary here, and when the show tries to be too serial, it falters. That's why we didn't need a long drawn Ross-and-Rachel-ing for Hannah and Adam to get back together.

And that's why the Ray/Marnie romance feels so forced, and boring. It doesn't make sense, and it's not going to make sense unless Marnie starts wearing donut buns and talking like she's on PCP. Ray belongs with Shosh. And Marnie belongs with Jessa—in hell.