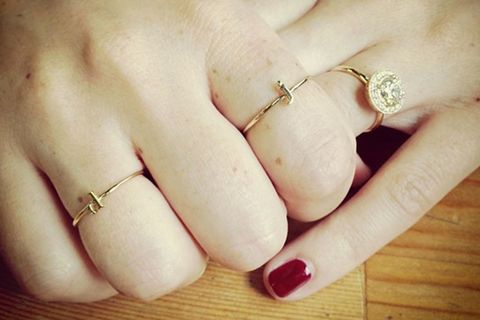 When Stephanie Miller, 29, a social media director in New York, became engaged a little more than a month ago, she and her fiancé decided that the best way to announce their betrothal to the world was via Instagram. Miller posted a still of herself in a hotel room in Kyoto, Japan—where the couple was vacationing—with her newly acquired diamond peaking out from the corner of the photo. The caption didn't mention the engagement, but Miller's followers got the idea. "Purrrty ring!" said one. "Sly and ever cool. SO EXCITED." said another. "Instagram feels intimate," Miller says of her choice to announce the news there first. "We pulsed out the news in waves: a call to family, a subtle share on Instagram. Then after a couple of days, the public post on the big guy."

"The big guy" meaning Facebook, which in the past few years has been the default platform for sharing major news publicly. "Sharing a post on Facebook is more powerful than issuing a press release," Miller said. But as Facebook has reached ubiquity, it feels like a less safe—and dare I say, crude—place to post life moments. After all, the only people who seem to use Facebook regularly are nosy moms of long-lost friends and weirdos from a past life. I.e., people with whom you might not want to share your plans to marry.

Lindsey Green, 29, a writer and publicist living in New York, took a similar approach to Miller's. "Our good friend, who happens to be the chef of the restaurant where we went to celebrate, Instagrammed first and broke the news for us. Which was kind of perfect," she said. "I waited about a week to post the news on Facebook. [We got] an amazing, but somewhat overwhelming, response."

While many couples still choose to post to Facebook once the proverbial cat is already out of the bag, some are forgoing it all together. Danielle McGrory, 32, a digital director based in Brooklyn, skipped Facebook when her then-boyfriend asked her to marry him in May 2013. "I still check Facebook semi-regularly, but my "friend" list on consists of so many people I am out of touch with: former classmates, old family friends, distant aunts and uncles," she said. "It's always those people you haven't spoken to in 15 years that leave the strangest comment or response." Instagram, on the other hand, felt safe. "It's the only social media platform I am really active on," McGrory said. "I communicate with my close friends there on a regular basis, so it feels normal and comfortable in that way." And with hashtags like #shesaidyes reaching 76,868 posts and 27,755 Instagrams boasting "#heputaringonit," it seems other people feel just like McGrory.

For some, an Insta announcement isn't even enough. When Neil Parris, 35, asked Jenna Caine, 31, to marry him in January 2014, he used the social media platform to propose. The Story of Jenna and Neil—a standalone account—documents their relationship through 40 images, including a video made by the stop-motion artist Rachel Ryle. The final photo was stamped with Will You…., and the caption read, Look at me...I have something I have been wanting to ask you. "I'm constantly on Instagram, so it was kind of perfect," says Caine, a recruiter who moved from New York to Los Angeles to be with Parris after meeting at Coachella in 2012. "We're both huge fans of Facebook and Instagram, and they both played a huge role in us coming together and falling in love." While the account was initially private, Caine announced her engagement via Instagram the next day, tagging @thestoryofjennanadneil and spurring the hashtag, #jeneil2014. The couple plans to marry this fall, but they likely won't be using this particular Instagram account to track other life moments. "We were thinking about that, but we haven't touched it since," says Caine. "We want to keep it special and unique. Maybe we'll add one picture at our wedding to complete the circle."

Related: When Binge-Watchers Break Up