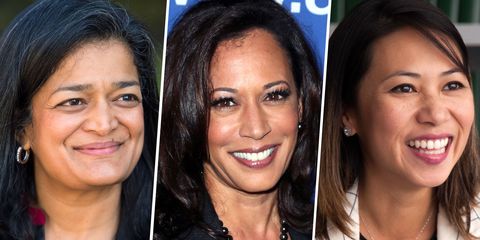 Ladies, listen up. If you've been feeling down about the state of the world lately, fear not. There are some *majorly* amazing women in positions at various levels of our government who are going to kick ass in 2017. Meet the women who are making history and making cracks in that glass ceiling.

Harris isn't in even in the Senate yet, but she's already making history: she's the first Indian-American senator and California's first black senator. Harris, a Democrat, was previously California's attorney general for six years. She's a champion of gay rights, she has expressed solidarity with the Black Lives Matter movement, and she helped reform California's criminal justice system, the Huffington Post reports. So basically, Harris is the kind of lady who gets shit done. She was also endorsed by the greatest political bromance of all time, Obama and Biden.

Yet another history making senator-elect: Duckworth will be the first Thai American woman to serve in the Senate. Duckworth, a Democrat, is a veteran of the Iraq War and in November 2004, she lost her legs and partial use of her right arm when her helicopter was hit by a rocket-propelled grenade. She spent a year in recovery and was awarded a Purple Heart for her service. Duckworth has worked tirelessly on behalf of veterans affairs, including creating a 24-hour crisis hotline for veterans.

Cortez Masto achieved another historic first: she will be the first Latina senator. Cortez Masto, a Democrat who was formerly the attorney general of Nevada, won a competitive election to replace Harry Reid, the outgoing Senate Minority Leader from Nevada. Cortez Masto is dedicated to immigration overhaul, a poignant and personal policy concern because Cortez Masto is the granddaughter of a Mexican immigrant, The New York Times reports.

Brown is the first openly LGBT governor elected in the United States. Brown, a Democrat, was the incumbent in the race for governor of Oregon—back in February 2015, she became governor of Oregon when then-governor, John Kitzhaber, resigned. But now, Brown is the first openly LGBT person to be elected governor, NPR reports. Brown identifies as bisexual and recently revealed she is a survivor of domestic violence, according to the Washington Blade.

Jayapal will be the first Indian-American woman to serve in the House of Representatives. Jayapal, a Democrat, immigrated to the United States from India when she was 16 and later founded OneAmerica, an advocacy organization for immigrants and refugees, the Huffington Post reports. Jayapal also earned an endorsement from Bernie Sanders, who praised her for fighting for paid sick leave and a $15 minimum wage while she was a state senator in Washington.

McMorris Rodgers, a Republican, has represented Washington's 5th Congressional District in the House of Representatives since 2005. McMorris Rodgers was re-elected to serve as the Chair of the House Republican Conference, and she is the highest ranking Republican woman in Congress, NBC News reports. McMorris Rodgers is dedicated to addressing the impact of poverty on everyday Americans, specifically for Americans with disabilities. It's a personal cause for her: her son, Cole, was born with Down syndrome.

Omar, a Democrat, was elected to the Minnesota state House of Representatives, becoming the first Somali-American Muslim woman elected to a state legislator. Omar and her family were refugees from Somalia who moved to Virginia from Kenya when she was 12, The New Yorker reports. "It is the land of liberty and justice for all, but we have to work for it," Omar told the Huffington Post. "Our democracy is great, but it's fragile. It's come through a lot of progress, and we need to continue that progress to make it actually 'justice for all.'"

Murphy, a Democrat, defeated Republican John Mica, who represented the 7th Congressional District of Florida in the House for 23 years, to become the first Vietnamese-American woman elected to Congress. Murphy's parents were Vietnamese refugees and she immigrated to the United States when she was one year old, NBC News reports. "It's time for a new approach in Congress," Murphy tweeted on election day. Murphy is also a college professor and her platform includes a goal to expand education access for children.

Feinstein, a Democrat, has been a Senator representing California since 1992, and is still shattering glass ceilings today. Back when she joined the Senate, Feinstein was the first woman to serve on the Senate Judiciary Committee. In January 2017, Feinstein will become the first woman to serve as the highest ranked Democrat on the Judiciary Committee, which means she'll play a crucial role in weighing Supreme Court nominations, along with attorney general and other court nominations, the Los Angeles Times reports. "It's a special honor to be the first woman to become ranking member of this committee, not to mention the first Californian," Feinstein said in a statement. "This committee, which touches the lives of so many Americans, will face many tough issues in the coming years, and I'll do my level best to represent all Americans."

Hassan, a Democrat, won a tight race for Senator against Kelly Ayotte, the Republican incumbent representing New Hampshire. Hassan is currently the governor of New Hampshire and previously served in the State Senate, where she was the majority leader and helped legalize same-sex marriage, the New York Times reports. One of her policy priorities is to address the heroin and opioid crisis through emergency federal funding to curb the public health epidemic and save lives. 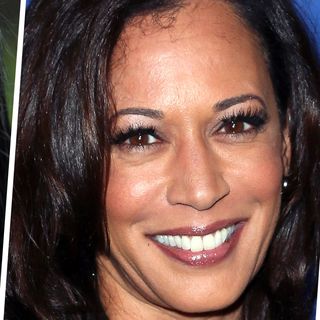 Advertisement - Continue Reading Below
This content is created and maintained by a third party, and imported onto this page to help users provide their email addresses. You may be able to find more information about this and similar content at piano.io
More From Culture
I'm Obsessed With the Ted Lasso Cast at the Emmys
All the Deets on Michelle's 'Bachelorette' Season
Advertisement - Continue Reading Below
'Bachelor In Paradise' Spoilers: Your 2021 Guide
'Bachelor In Paradise' 2021: Everything We Know
Taraji P. Henson Hints She Might Release Music
Watch the First Bloody Trailer for 'You' Season 3
The "Berries and Cream" Trend on TikTok, Explained
These Goats Could Help Save California
Zoe Kravitz Claps Back at Critic of Her Met Dress
Meghan and Archie Bake a Cake for Harry's Birthday