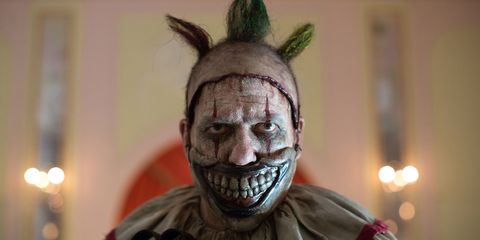 It's official: American Horror Story: Cult is just a few weeks away. As we wait to see what Ryan Murphy has in store for us, we rounded up and ranked the 50 most disturbing moments in AHS history.

Call it cliche, but Chester (Neil Patrick Harris) sawing Maggie (Emma Roberts) in half during a performance was extremely disturbing and majorly out of left field. Sure, he was fed up with her B.S., but that's one messed up way to go.

At the beginning of the Blood Moon Ritual, Elias (Denis O'Hare) is shot with three arrows. Immediately, Matt (Andre Holland) and Shelby (Lily Rabe) make a run for it with hearts beating so fast, we could practically feel it ourselves.

Of course a scary-ass story is incomplete without a few naive suckers. Enter: the poor, poor tourists who decided to check into the hotel. The couple is greeted and attacked by a terrifying monster that lives in their mattress.

The Butcher (Kathy Bates), evil as she may be, gets revenge on those who had betrayed her by murdering the entire Roanoke Colony.

OK, Madame LaLaurie had it coming, but when she enters an eternal hell of continuous torture, we couldn't help but shudder.

After a long, bloody delivery, only one of Vivien's twins survives. Vivien, who is slowly dying, is greeted by Violet who urges her to let go and join her in death, while Ben (unaware of Violet's presence) pleads for Vivien to fight. The dramatic, and exhausting, scene ends with Vivien's death.

After the long-awaited return of Taissa Farmiga, her character Sophie is burned alive alongside Milo (Jon Bass) as the Roanoke clan discovers them.

Constance is one, cruel bitch, but when she locks her daughter Addie in a room full of mirrors, our stomachs churned.

Jimmy (Evan Peters), who has deformed, claw-like fingers, works as a prostitute for bored housewives, and the all-too-graphic details scarred us for good.

In a drugged out state, Sally (Sarah Paulson) literally sews herself to the corpses of her bandmates. And yes, we can never look at sewing needles the same way again.

Trapped in her own, private purgatory, Misty (Lily Rabe), the animal-loving Earth child, is forced to continuously slice open a frog in science class.

It didn't take much to know that something evil was cooking in Vivien's belly, but her ultrasound appointment confirms just how rapidly her baby is developing. That fainting ultrasound technician is basically all of us.

A scary story without an exorcism is basically peanut butter without jelly. Asylum's second episode reveals a teenage boy's crazy exorcism, and as he dies, his spirit enters Sister Mary Eunice (Lily Rabe).

Pro tip: If Dandy knocks on your door, you don't answer. When Dandy murders an entire group of women, gouging out their eyes and leaving their bodies in a pool, our appetite was spoiled for eternity.

The piercing scream that Lana lets out as she discovers Thredson is Bloody Face will honestly forever haunt our dreams (and ears).

After abusing elderly patients for the hell of it, the twisted twins finally get the karma they deserve—after being dragged into the woods, one is ripped from limb to limb, and the other's head is chopped off.

In a crazy-visual flashback, Elsa's (Jessica Lange) disturbing past is revealed. Once a prominent escort, Elsa's career came to a grim end after being tied to a bedpost as her legs were cut off with chainsaws—all of which was caught on film and sold for profit.

Spalding's knack for tea parties is terrifying in itself, but when we learn he held onto Madison's corpse as a part of his doll collection, it's taken to a new, disturbing level.

Is it really American Horror Story without someone's guts being ripped out? In Roanoke's fourth episode, the Butcher rips Cricket Marlowe (Leslie Jordan) inside and out.

Proving that there is not a sweet bone in American Horror Story's body, in a surprising and upsetting moment, Dell (Michael Chiklis) embraces Ma Petite in a hug, only to snap her neck and kill her.

After Fiona's approval, Cordelia (Sarah Paulson) attempts to get her psychic visions back. Her game plan? Stabbing herself in the eyes with a pair of garden shears.

As Kyle's mother climbs into bed with him, we had a feeling something wasn't right. But as she begins to molest Kyle and tears stream down his face, we learn a heart-wrenching dynamic of his past.

Spalding's (Denis O'Hare) tongue (or lack thereof) was always an interesting storyline. But instead of having it ripped out in a bloody brawl like many of us had imagined, Spalding reveals he cut it out himself to keep quiet about a murder.

In a super-twisted daydream, Stanley (Denis O'Hare) feeds twins Bette and Dot (Sarah Paulson) two poisonous, pink cupcakes. The twins' mouths fill up with foam and they die, while Denis envisions selling them for display in the "Freak Museum."

Millie (Grace Gummer) learns a lesson from her evil dad in a straight-up horrific scene. After hanging out with the "freaks," Millie awakes to a completely tattoo faced, courtesy of her pops.

Pop-out scenes never cease to scare us, and Shelby (Lily Rabe) discovering the Piggy Man behind a shower curtain made us legitimately jump.

Next
Things You Never Knew About 'Devil Wears Prada' 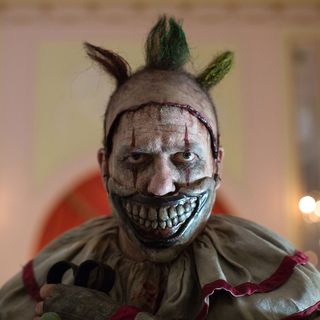