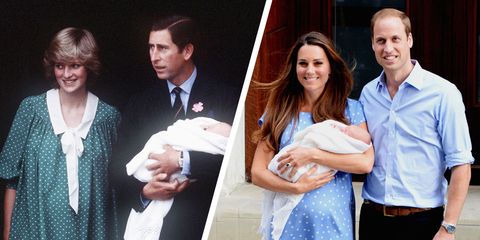 It's not every day a royal baby is born, so when the Duke and Duchess of Sussex announced they were expecting a second child (!!!), we went a little nuts on the royal-infant front. After guessing baby names and trying to figure out the due date, we decided to dig a bit deeper into what really happens when a royal baby arrives. Like...

For decades the royals gave birth at home. Queen Elizabeth II was born at a private family home in London and gave birth to her sons Charles, Andrew, and Edward at Buckingham Palace. Her daughter Princess Anne was born at another royal property called the Clarence House.

2 of 55
However, Princess Diana started a new birthing tradition.

3 of 55
A witness used to be required in the delivery room.

When the Queen was born in 1926, the home secretary was present in the delivery room. The centuries-old tradition required someone to be present to confirm a a royal birth was actually happening. The custom ended before the birth of Prince Charles in 1948.

4 of 55
And up until the birth of Prince Charles, fathers were not allowed in the delivery room.

For centuries, birthing was known as an all-female event and the males would remain outside of the delivery room.

5 of 55
Royal babies used to be typically homeschooled.

Queen Elizabeth herself was homeschooled. However, the Duchess and Duke of Cambridge have chosen to enroll Prince George and Princess Charlotte in school—starting in 2016 with Prince George's nursery school, the Westacre Montessori School in Norfolk, England.

6 of 55
Public schools are typically unheard of.

7 of 55
Princess Diana was first to break this "no public school" tradition.

Prince William became the first heir to the throne to attend public school.

8 of 55
Non-royal grandparents were often disregarded.

This tradition has certainly changed with modern times. In the past royal children were often prevented from having a close relationship with their maternal grandparents if they didn't descend from British royalty. That hasn't been the case with the Middletons, however.

9 of 55
The mother's clothes are carefully chosen in her first public appearance post-birth.

Kate Middleton mirrored a similar polka-dot dress to Princess Diana after giving birth to Prince George. It's considered a sign of respect and tribute to the late Princess.

10 of 55
Midwives are typically present for the births.

It's reported Kate Middleton had three midwives accompany her during the birth of Princess Charlotte—all of whom were sworn to secrecy.

11 of 55
The birth announcement is displayed on an easel in front of Buckingham Palace.

However, the Duke and Duchess of Cambridge chose to announce Prince George's birth via email and Twitter before the easel had been posted—seemingly breaking tradition.

12 of 55
The announcement used to be handwritten, but now it's typed.

The doctors at the hospital sign it and then it's delivered back to the palace by car.

13 of 55
People line up outside of the palace to see the easel in-person.

We totally would too.

According to the Royal Parks, it's given as a sign of respect or welcome upon various important royal occasions.

And it's located near Buckingham Palace.

16 of 55
Royal babies typically have three to four first names.

Chris JacksonGetty Images
17 of 55
But don't expect any non-traditional names.

This rule for royal baby names comes down to where they land in the line of succession (ahem, to the throne). As future King and Queen Consort the Duke and Duchess of Cambridge had no wiggle room for picking non-traditional names, hence George, Charlotte, and Louis. However, Prince Harry and Meghan Markle broke the mold by naming their firstborn son Archie Harrison.

18 of 55
They usually combine names of previous monarchs and relatives.

There's a big pool of royal family members to draw from and predicting the royal baby's name has basically become a national past-time. Not long after a pregnancy is announced betting sites begin taking wagers on all sorts of name.

Up until the early 20th century, royal babies actually had no last name at all. Instead, they were known by the names of the county of which they ruled.

While attending school, Prince George will simply be known as George Cambridge.

The correct title when referring to the royal baby is His or Her Royal Highness Prince or Princess (name) of Cambridge.

22 of 55
The birth is announced by an unofficial town crier.

The current town crier is Tony Appleton and he has announced the births of all three Cambridge children. The position originated in medieval times since the majority of the townspeople in the country could not read or write.

23 of 55
Crowds wait outside of the hospital for the birth to happen.

They have even been known to sleep there over night.

Getty Images
24 of 55
The Queen must be one of the first people informed of the birth.

Before any official announcement is made, the Queen must be told the happy news. With the birth of Prince George, it was reported that Prince William used an encrypted phone to call his grandmother.

DANIEL LEAL-OLIVASGetty Images
25 of 55
Royal siblings make an appearance at the hospital.

How adorable is Princess Charlotte's little wave on her way to meet Prince Louis? The Cambridge's aren't the only royal siblings to visit mom and baby in hospital—Prince William was photographed visiting Prince Harry when he was born in 1984.

26 of 55
There has always been preferences for males in the royal succession.

Thankfully, this was abolished in 2013. This was why Princess Charlotte retained her position as fourth in line to the throne when her younger brother, Prince Louis, was born in 2018.

27 of 55
There's a designated royal OB-GYN who performs the royal births.

His name is Marcus Setchell and he postponed his retirement to deliver Prince George. He is also the Queen's obstetrician-gynecologist. In the past, Sir George Pinker delivered Prince William and Harry.

28 of 55
Breastfeeding is a traditional practice for royal mothers.

Queen Elizabeth II breastfed her children, and so did Princess Diana. It's been reported Kate Middleton has done the same, though it's not officially confirmed.

29 of 55
However, the practice used to be completely off-limits.

According to The Telegraph, "Queen Victoria found the idea of breastfeeding repellent, considering it the 'ruin' of intellectual and refined young ladies." Today it remains a personal decision.

Don't expect to hear royals referring to one another with nicknames. As protocol states, royals must use the most formal versions of their names in public. This is why Prince William refers to Kate Middleton as Catherine at engagements.

31 of 55
Due dates are not necessarily announced right away.

The Duchess of Cambridge's illness caused her to announce her third pregnancy early, however the family never confirmed a date. Similarly, Prince Harry and Meghan Markle vaguely shared they were expecting their daughter to arrive this summer.

32 of 55
Neither are the babies' names after giving birth.

Princess Diana and Prince Charles announced Prince Harry's name the day he left the hospital whereas Prince William's name was not made public for several days.

33 of 55
Paternity leave is expected.

Prince William received unpaid paternity leave from the Royal Air Force for the births of all of his children.

Here, Prince William is pictured with his Shetland pony at Highgrove House in Doughton, Gloucestershire in 1986.

35 of 55
Gifts are sent across the world from foreign leaders as well as the public.

When Prince George was born back in 2013, the New Zealand government sent a shawl made from fine merino wool—the same gift the Duke of Cambridge received over three decades ago. He also received 610 unofficial presents and his gifts were displayed at the "Royal Childhood" Buckingham Palace exhibit.

Prince William was reportedly the first royal baby to break away from this tradition when Princess Diana opted for disposable diapers instead.

37 of 55
They must attend the annual Trooping the Colour ceremony.

It's for their grandmother's birthday, after all. The traditional Trooping the Colour ceremony is also known as the Queen's official birthday celebration. Here, the entire Royal family watches the Royal Air Force fly above from the palace balcony.

38 of 55
Royal births are normally announced after the 12th week of pregnancy.

However, exceptions have been made with Kate Middleton due to her acute morning sickness. News broke about baby no. 3 after the Duchess couldn't attend an event at the Hornsey Road Children's Centre in London.

39 of 55
The gender is not revealed before the baby's arrival.

While Meghan and Harry announced that their second child would be a baby girl, Prince William and Kate didn't break this tradition with any of their three children. It's rumored they didn't even know Prince George's gender themselves.

40 of 55
The royal parents have to officially register the birth with the country.

England and Wales requires all births must be registered within 42 days at the hospital or a local register office. Royals, they're just like us.

41 of 55
Nannies have traditionally been the central caretakers.

And they're taught everything from defensive driving to security protocols to Taekwondo. The Cambridge's nanny, Maria Borrallo, has been with them since Prince George's birth.

42 of 55
Royal babies are christened several days to weeks after they are born.

And this is when they often make their official first public appearance. Prince George and Prince Louis were christened at St. James's Palace in London and Princess Charlotte (above) was christened at Church of St. Mary Magdalene on Queen Elizabeth II's Sandringham Estate.

43 of 55
The christening is typically done by the official head of the Church of England.

His name is Archbishop of Canterbury Justin Welby. In addition to the church, previous generations of royals have held the event at Buckingham Palace, where Princes Charles and William were christened in the Music Room. The queen and her sister were baptized in a private chapel that was destroyed during World War II.

44 of 55
Media access to the christening is often restricted.

Aside from the after-party, of course. However, with Princess Charlotte the royal family broke this tradition and allowed the public to take selfies.

Next
The Next Big Thing: What a Creative Needs 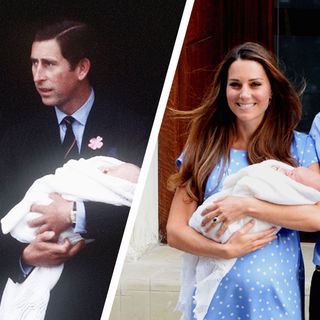 Advertisement - Continue Reading Below
This content is created and maintained by a third party, and imported onto this page to help users provide their email addresses. You may be able to find more information about this and similar content at piano.io
More From Culture
'Bachelor In Paradise' 2021: Everything We Know
'Life After Happy Face' Is Your Fave New Podcast
Advertisement - Continue Reading Below
Will There Be a Season 3 of 'Virgin River'?
The New Horror Movies That'll Leave You Breathless
Zendaya Shared a Teaser of 'Euphoria' Season 2
Listen to the Best New Love Songs of 2021 (So Far)
Meet the Cast of 'Too Hot to Handle' Season 2
Meet the Cast of Katie's 'Bachelorette' Season
Simone Biles: "Don't Be Ashamed of Being Great"
68 Movies That Are Just Fully About Sex