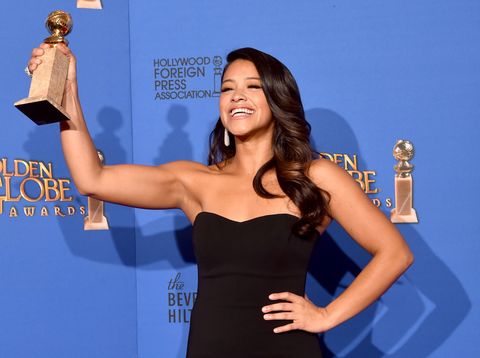 At the Golden Globes last night, it was hard to miss the feminist overtones. Two funny female hosts. Shout-outs and thank-yous to the trans community. Some of Hollywood's most seasoned feminist activists taking the mic. Famous men declaring themselves proud husbands. Recognition of rape survivors.

Some of the feminism on display was the kind of cookie-cutter you-go-girl-ism present at just about any award show in the past 30 years — see Amy Adams breathlessly thanking all the strong women in the room for being good role models for her 4-year-old daughter. But much of it was more complex and cutting-edge, starting with Tina Fey and Amy Poehler launching into an uncomfortable and pointed bit about the rape accusations against comedian Bill Cosby. A few minutes later, Joanne Froggatt won for her role on Downton Abbey, and in her speech talked about the many letters she received from rape survivors after her character was raped on the show. In one letter, the writer said she wasn't sure why she was writing, but she just wanted to be heard. "I'd like to say, I heard you and I hope saying this so publicly in some way means you feel the world hears you," Froggatt said.

That desire to be heard and recognized set the tone for the night, and women led the way. Jane the Virgin star Gina Rodriguez, already on a show notable for its nuanced take on reproductive rights and Latino families, told the audience that her award is about more than just herself and "represents a culture that wants to see themselves as heroes." Patricia Arquette, winning for her role in Boyhood, gave a nod to the largely unrecognized work of single moms, which both she herself and her character were. "Thank you for shining a light on this woman and the millions of women like her, and for allowing me to honor my own mother with this beautiful character," Arquette said. And while they never made it up on stage, two of the women behind Selma — director Ava DuVernay, and producer and actress Oprah Winfrey — at least got lots of screen time and a well-deserved shout-out from musicians Common and John Legend when they won for Best Original Song. It was clear that the real work behind that film came from two visionary women.

And then there were the men. Despite a handful of typically boorish remarks — Jeremy Renner commenting on Jennifer Lopez's "globes," for example — socially conscious men showed up last night. Common was perhaps the best example, first giving credit to the women behind Selma and then launching into a salvo for social justice, saying, "As I got to know the people of the civil rights movement, I realized I am the hopeful black woman who was denied her right to vote. I am the caring white supporter killed on the front lines of freedom. I am the unarmed black kid who maybe needed a hand, but instead was given a bullet. I am the two fallen police officers murdered in the line of duty. Selma has awakened my humanity."

George Clooney was also in top feminist form. He took an early ribbing from Fey and Poehler good-naturedly, when Fey pointed out that Clooney's wife, Amal Clooney (née Alamuddin), is a "human rights lawyer who worked on the Enron case, an adviser to Kofi Annan on Syria, and was appointed to a three-person commission investigating rules of war violations in the Gaza strip." "So tonight her husband is getting a lifetime achievement award." In accepting that award, Clooney told the audience, "Listen: It's a humbling thing when you find someone to love — even better when you've been waiting your whole life. And when your whole life is 53 years, Amal, whatever alchemy it is that brought us together, I couldn't be more proud to be your husband." Thanking one's significant other is hardly history-making; a wildly successful actor declaring himself humbled by his emotions and defining himself as a proud husband rather than just thanking his wife is.

Trans rights also got their due at the Globes, with Transparent director Jill Soloway dedicating her win to the trans community and specifically to Leelah Alcorn, the trans teenager who committed suicide after her religious parents reportedly forced her into Christian therapy to "fix" her identity. Transparent actor Jeffrey Tambor also dedicated his award to the trans community — not something you see a whole lot from famous, middle-aged white men.

The veteran feminists also had their day, with Lily Tomlin and Jane Fonda taking the stage 35 years after starring together in Nine to Five. Both Fonda and Tomlin are longtime feminist activists (Fonda is also the co-founder, with Robin Morgan and Gloria Steinem, of the Women's Media Center.) "Finally," Tomlin quipped, "we can put away that negative stereotype that men just aren't funny."

But the feminist speech of the night was Maggie Gyllenhaal's. Nuanced, thoughtful, and honest, she skipped simplistic Girl Power cliches and touched on what truly made this past year's roles for women so important:

Of course, women in Hollywood are still often underpaid compared to their male counterparts, and diversity in color, size, nationality, gender identity, and ability often sorely lacking. But Gyllenhaal is right: The needle is moving, if slowly and just a little. And all those little feminist steps we saw last night, and in the movies and television shows in the year preceding it, add up to big changes. Here's to more in 2015.

Hell Yeah, Maggie Gyllenhaal—This Globes Speech Is Such a Victorious Moment for Women