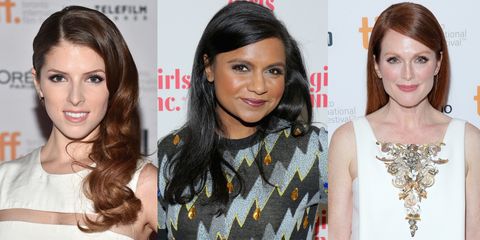 Last night, a viral image of a dress that appears black and blue to some and white and gold to others (blame the optical illusion on bad lighting) broke the Internet. The world was split into two teams over the garment's "true" color. Opinions were declared, passionate debates were had. And Hollywood took sides:

k I'm in Milan so I know I'm late but I was sleeping &..... black and bluuuueeeee

i see grey and blue

I'm confused. The dress everyone is talking about is blue and black. Who is seeing white and gold???!

IT'S A BLUE AND BLACK DRESS! ARE YOU FUCKING KIDDING ME

The dress is white and gold. I see the back lining but that's it. Also, it looks like it was shot in the shade so it's a lighting thing

What color is that dress? I see white & gold. Kanye sees black & blue, who is color blind?

If that's not White and Gold the universe is falling apart. Seriously what is happening????

I love that the entire internet is having an existential crisis together!! 🙌 (white and gold obviously) #WhatISColorAnyway

"I love that the entire internet is having an existential crisis together!! 🙌(white and gold obviously)#WhatISColorAnyway"

@mindykaling @bjnovak what's the matter with u guys, it's white and gold.

@ELLEmagazine it's white and gold 🙊

What if I think the dress is baby blue and gold

i saw white and gold, then i saw blue and black. now I'm confused.

either way...im not gonna be wearing that dress...

"my mind is blown. What do you guys see?? Is this dress blue and black, or white and gold?"

From this day on, the world will be divided into two people. Blue & black, or white & gold. http://t.co/xJeR7GldwP pic.twitter.com/i6BwVzPzSZ

And Those Who Are Over It

Fuck the dress it's heinous

But also... Where did this dress come from? Can someone please explain?

The Gold is Blue and Dress.

Emerged from the editing room to find the entire world is very excited about a dress and what color it is. I feel scared.

(Spoiler: a second image of the dress was found, and it is in reality black and blue.)

#TheDress is BLUE AND BLACK. Bless you @Buzzfeed http://t.co/otaOwymE5A

Update: Dr. Reena Garg, ophthalmologist at Mt. Sinai in New York, provides something of a medical explanation for this phenomenon. "This is definitely an interesting picture," she says. "First, it would help to understand how we see color. Our eyes have cells that are light sensitive and help us distinguish color and shade. They are called the rods and the cones. The cones are color sensitive, specifically to red, green, and blue. The rods are shade sensitive and see black and white. In dim light settings, only the rods are activated, and we are able to see contrasts in shades. This helps us with our night vision. In bright light settings our cones also become activated and we can discern colors. The rods and the cones work together with other cells in the eyes and the brain to organize the light reflected as contrasts between light and colors—or as shades of colors. The retina has adaptive mechanisms to correct images based on the input from the rods and cones and the shades and colors that it is receiving."

So no, we're not all crazy. It's science.

Alyssa Bailey News and Strategy Editor Alyssa Bailey is the news and strategy editor at ELLE.com, where she oversees coverage of celebrities and royals (particularly Meghan Markle and Kate Middleton).
Advertisement - Continue Reading Below
More From Culture
HBO Is Making Iconic Shows & Movies Free to Watch
Tim Gunn & Heidi Klum Also Wear PJs to WFH
Advertisement - Continue Reading Below
'Parasite' Is (Finally!) Coming to Hulu
The Best Teen Movies of 2020
Family Movies Both Grown-Ups and Kids Will Love
The Best Wedding Movies of All Time
Read 'Anna K' Even If You Didn't Read the Original
19 Most Underrated Films of All Time
The Music Podcasts We Keep Pressing Play On
Why You Keep Seeing "Until Tomorrow" on Instagram