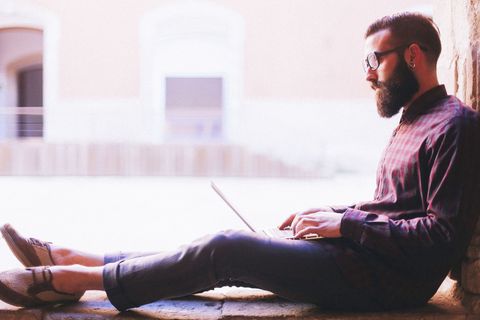 While we were researching man buns and lady buns and feeding the same silly part of the Internet that gave rise to #TheDress, we came across the most wonderful, likeable thing: Men's Hair Forum, a chat room in which dudes talk about hair extensively.

The man bun section alone has 24 super in-depth posts, most of which include inspiration pictures of celebrities and sports stars and models from Tumblr. There are earnest appeals for advice on everything from hairstyles that make you look taller, hairstyles that complement different face shapes (bookmarked!), hairstyles for gingers who can't grow beards but have tattoos. (I made that last one up, but I'm 98 percent sure if a clean-shaven redhead with a tramp stamp were to ask about that, he would receive some very kind, well-researched answers.)

It's kind of like Benedict Cumberbatch and the concealer: It's cool to see guys being so open about grooming and self-care when it feels like, not that long before, the only acceptable styling thing was either gel or "go rub some dirt in it." And that's why we're so into a place like MHF—because boys should have an intimate and safe-feeling and supportive environment to talk about beauty too.

Rushed for Work? These 15 Chic Hairstyles Take Under 60 Seconds

9 Super Pretty Hairstyles We Saw on the Fashion Week Runways