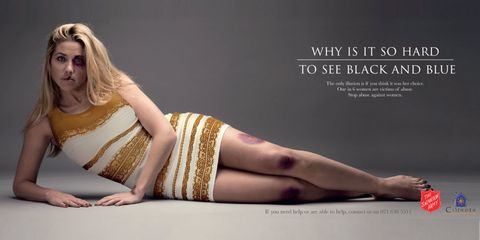 Just one week ago, #TheDress that appeared white and gold to some, black and blue to others, consumed the Internet. In a testament to its global reach, the Salvation Army's South African branch used the garment in a domestic violence ad that will, quite frankly, change the way you see it.

The organization tweeted the ad out this morning, which features a bruised model in a white and gold version of the dress. The piece poses a simple but powerful question: "Why is it so hard to see black and blue?"

"The only illusion is if you think it was her choice," it reads below the slogan. "One in 6 women are victims of abuse. Stop abuse against woman."

The ad includes both the Salvation Army's logo and that of its charity Carehaven, which houses abused women and children.

Horrifying: If A Woman Is Denied An Abortion, She's More At Risk For Domestic Abuse