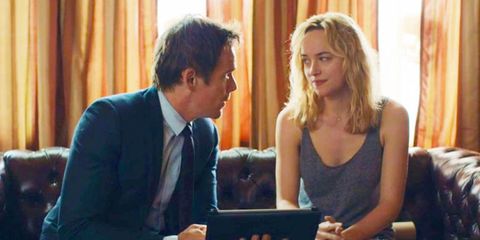 Reciting a jumble of strangely ordered words in iambic pentameter ain't easy, but neither is saying something like, "The muscles inside the deepest, darkest part of me clench in the most delicious fashion" with a straight face.

While the battle over Fifty Shades Darker rages on, Dakota Johnson has hung up her flogger to play Imogen in a modern-day film adaptation of Shakespeare's Cymbeline. (ICYMI, it also has a lot to do with sex and control.) And in the scene that premiered on Vulture today, she's not half bad.

She's properly creeped out when Ethan Hawke swipes through an iPad loaded with pics of Penn Badgley drinking wine and smoking a bong with another girl. She does hand movements. Her (blonde) curls sway like Anastasia's inner goddess indignantly when she threatens to call her dad to tell on the aforementioned creepy Ethan Hawke for hitting on her.

Will you finally be persuaded this girl really can act? Watch the clip below.

Dakota Johnson Sings "Unwritten" to Cara Delevingne, Is the Cutest

Chelsea Peng I'm Chelsea Peng, the assistant editor at MarieClaire.com.
Advertisement - Continue Reading Below
More From Culture
How the 'To All the Boys 2' Soundtrack Was Made
Does 'Bachelor's Madison Prewett Self-Eliminate?
Advertisement - Continue Reading Below
How Much Does 'The Bachelor' Make?
Tales of a Hollywood Con Queen
Who Will Be on 'Bachelor in Paradise' in 2020?
When Will 'The Bachelor' Women Tell All Air?
'The Bachelor' Has Already Finished His Season
The Very Best Rom-Coms of All Time, Ranked
An Investigation Into the Next 'Bachelorette'
The Best Korean Dramas to Get You Hooked