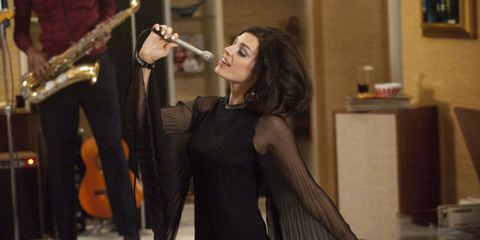 After sleuthing forlittle-known facts about Mad Men, we learned that the show coughed up $250,000 to license "Tomorrow Never Knows" by The Beatles as a closing track for one of its episodes. So, needless to say, it's a series that takes its music very seriously. In fact, we'd argue that it's as integral to the viewing experience as the cast, set, costumes, and even the script.

The songs from the '50s and '60s don't serve simply as timestamps, but are hand-picked for each scene so flawlessly it's like you're hearing the songs for the first time—which, as millennials, we very well might be.

After seven seasons, there have been so many highlights: Megan serenading Don with a cover of Sophia Loren's "Zou Bisou Bisou," Peggy and Don dancing to Frank Sinatra's "My Way," Roger Sterling tripping on LSD set to "I Just Wasn't Made for These Times" by The Beach Boys, Don getting his groove back with help from "Satisfaction" by The Rolling Stones. The list goes on...

Ahead of Mad Men's return on Sunday, we've rounded up 25 songs that blew our mind and will help immortalize the show forever.


You should also check out: