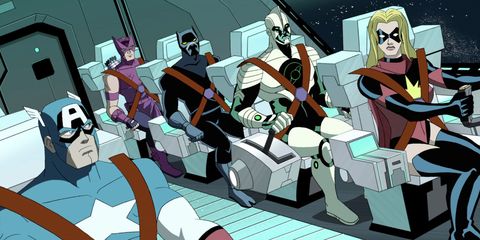 Who run the world? Girls. Writers Nicole Perlman (Guardians of the Galaxy) and Meg LeFauve (Pixar's Inside Out) are apparently thiiiiiiiiiis close to inking a deal to pen the latest offering from Disney and Marvel—Captain Marvel, the first female-driven superhero movie from the comic powerhouse.

But that's not all—TheWrap is reporting that Marvel is working to hire a female filmmaker. (Could it perhaps be Michelle MacLaren, who just recently left the new Wonder Woman film after having creative differences with Warner Bros? COULD IT?!)

Here's hoping. Especially since Wonder Woman has already replaced MacLaren with another female director—Patty Jenkins. In any case, we'll be there when the movie opens July 6, 2018. Even though that's *so* far away.

This content is created and maintained by a third party, and imported onto this page to help users provide their email addresses. You may be able to find more information about this and similar content at piano.io
Advertisement - Continue Reading Below
More From Culture
'Bachelor In Paradise' 2021: Everything We Know
Meet the Cast of Katie's 'Bachelorette' Season
Advertisement - Continue Reading Below
Simone Biles: "Don't Be Ashamed of Being Great"
68 Movies That Are Just Fully About Sex
Everybody Loves Annie
The Beachiest Beach Reads of All Time
This Summer, Let's Escape
Films That Pull Back the Curtain on Royal Life
'Succession' Season 3: Everything We Know So Far
A Father’s Day Gift Guide for Procrastinators